The Boston Celtics know their enemy better than they know themselves, or so it seems. 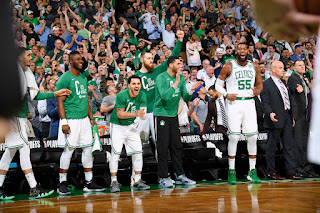 As the series heads to the Philadelphia 76ers home court for the first time this evening, the onus is on Brett Brown and company to adjust to Boston's gameplan.

To date, that's consisted primarily of Al Horford or Mook Morris smothering Ben Simmons while the other four players cover the perimeter on defense, while Terry Rozier and Jayson Tatum have been slashing to the cup with ease on the other as Philly's big provide almost no resistance inside.

Most important has been that attack on Simmons, however, something we highlighted on last week's CL Pod as a key element for a Boston series win.

Watch the videos below to hear NBC Boston's Chris Mannix talk about that strategy, and to hear more about what to expect when the home court crowd is a hostile one.