Jayson Tatum had another great game last night in the 108-103 Celtics victory over the 76'ers. Ben Simmons did not! 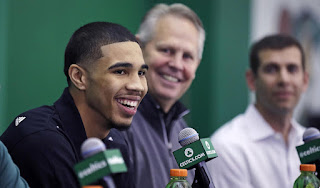 It was always a three-man race for NBA Rookie-of-the-Year between Simmons, Donovan Mitchell and Tatum. Simmons and Mitchell were neck-and-neck for first place in most polls, and Jayson came in third. The regular season is over, and we won't find out the ROY winner until late-June.

Under the intense pressure of the playoffs, our real rookie is doing very well indeed. Boston fans don't regard Simmons as a real rookie - and make it known. Jayson has provided much-needed scoring and rebounding, and he follows Tommy Heinsohn's constant advice of ATTACK THE PAINT!

He still loses control of the ball occasionally on his drives and could use some additional muscle and strength. But he is finishing his drives much better, passing off more effectively and hitting his outside jumpers.

Let's look at a statistical comparison of Tatum and Simmons in their two playoff games against each other.

Only one other Celtics rookie has done that... pic.twitter.com/KeptEGED4I

Yes, I know it's only two games, but Jayson wins this one. In the regular season Jayson was often the third or fourth option on offense after Kyrie Irving, Al Horford and Jaylen Brown. He still put up numbers not often associated with a rookie.

Simmons had to defer to no one. He initiated the offense for Philly, scoring, rebounding and passing while accumulating big stats. Joel Embiid put up some impressive stats and the Embiid/Simmons duo accounted for a large percentage of the 76'ers numbers.

Jayson Tatum was asked about the “He’s a rookie” chants after Game 1: "I am a rookie. But I love our fans. They support us.”

Jayson Tatum was asked about the same chants after Game 2: "I am a rookie. We got the best fans. They support us, so it was appreciated."

In Last night's game Simmons was held to only one point in 30 minutes of play. Jayson had 21 points in 33 minutes. Boston's tenacious defense was responsible for Ben's poor production, but only one point? In 30 minutes?

It is noteworthy that T. J. McConnell replaced Simmons in the lineup and played 17 minutes, shot 4-for-4 on field goals while handing out five assists with no turnovers. His plus/minus was +16. Ben's was -23. So not-a-rookie Ben is behind in this one, while our real rookie, Jayson, is ahead two games to none, and we are off to Philly.