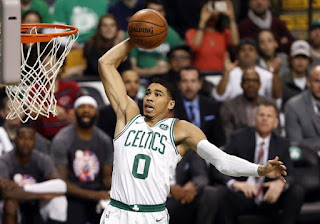 For those immersed in despair over the young Boston team falling to the nearly-omnipotent Lebron James and his crew, I will start with Jayson Tatum's performance. In 42 minutes, he totaled 24 points on 9-of-17 from the field while grabbing seven rebounds.

More than that - he just seemed poised and in control. He didn't have a lot of assistance from his teammates. Terry Rozier, Marcus Smart and Jaylen Brown all seemed panicked and unsettled. Tatum is heading to stardom.

We all know there would have been a different outcome had Kyrie Irving, Gordon Hayward and Daniel Theis been available and healthy. That will happen next season.

We are also very aware that Danny Ainge already has a series of plans in place to have a powerhouse of a team in place by September. He will be addressing the team weaknesses that became evident in the Conference Finals.

The Celtics will have their two injured veterans, Kyrie and Gordon, back and that will help solve the youth issue and the scoring woes. This present Boston team has had trouble scoring the ball all season.

Danny also knows you can't teach size, and Terry Rozier, at 6'2", was caught too often in mismatches against Lebron and Tristan Thompson. That will factor in this summer on the question of signing Marcus Smart and/or extending Terry. I doubt we will see both back in September.

There is no such thing as a mismatch with Smart on defense, and he is an ultra-valuable backup. He is the darling of the Boston fans and for good reason. I just don't see him as a starter for the Celtics, but Boston is the right team for him.

Greg Monroe has been little-used in the playoffs, and he is just too slow on defensive switches. He does not seem a good fit with Brad Stevens schemes. Aron Baynes does fit well in limited minutes. He defends well, plays hard and is a fierce rebounder. At the right price, he may be back.

In several Twitter polls I have conducted, respondents have shown a strong preference for the Celtics to acquire a rebounder-rim protector, either in the upcoming draft or through free agency. That certainly makes sense.

Al Horford has carried a heavy load, particularly in the post-season. Tristan Thompson, as always, gave him a lot of trouble in this series. He is more comfortable with an additional veteran or two around him. That would be Kyrie and Gordon.

Except for Jayson Tatum, young Celtics looked overwhelmed by magnitude of Game 7.https://t.co/28Emcq0jkc

Marcus Morris had a double-double last night, but he also does not seem to be a good fit for the Celtics. I see him as part of a trade, either this summer or prior to the trade deadline.

Both Jaylen Brown and Rozier just didn't have it in last night's contest, and it looks like the moment was just too much for these two youngsters. Both are extremely talented, but as previously stated, T-Ro's size and the mismatches it creates are a problem. Brown has no such issue, and next season may see him progress into stardom alongside his Jay-Team partner, Tatum. And Daniel Theis can not be ignored. He just kept getting better and better as the season progressed, and he will be back.

This injury-plagued team was magnificent. Few envisioned them getting this far into the post-season. Danny Ainge is determined to put a powerhouse on the floor in September, and we can be sure he will have the pieces in place. Most NBA analysts are predicting Boston taking control of the Eastern Conference.

"I just know he's built for stardom." LeBron James announces to the world that Jayson Tatum is the real deal. https://t.co/vlTo1fsThX

The NBA draft will be held on June 21, 2018, and the Celtics have the 27th pick in the first round. I will be doing a series of articles and Twitter polls centered on the draft - potential draft choices - and trade situations involving that pick and/or moves up or down in the draft itself. The 2018-19 season starts today for the Celtics. Danny's mind and phone are most likely busy as I write this.