You may call it confidence. You may even call it cockiness. But Jaylen Brown has it now and can back it up. 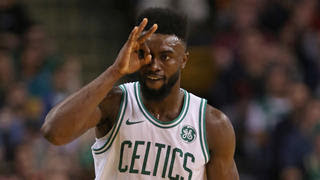 He was reluctant to drive to the hoop, and if he did he would have trouble finishing. Not any more! He has been aggressively taking - and hitting - his outside shots and taking it to the hole with authority, even against Lebron James.

In the two games thus far against the Cleveland Cavaliers, he is Boston's high scorer, averaging 23 PPG on 53% from the field and 46% on 3-pointers. His aggression also shows in his board work with seven rebounds per game in the Eastern Finals. Here are some thoughts on Jaylen by his tough-as-nails teammate, Marcus Smart (per Nba.com's Taylor Snow):

“It’s just things just from [saying], ‘You can't guard me,’ to the flexes, the poses, to calling people ‘little one’ when he posts them up and things like that. When a guy is doing that and he backs it up, it kind of gets into your head like, ‘You know what, I don't really know if I can guard this guy.’

“That’s a mental thing, a part of the game that a lot of good players understand," continued Smart. "The mental game is just as much important as the physical.”

We saw that level of confidence in Paul Pierce. He would tell his defender what he was about to do, and then he would do it. Same with Larry Bird. And there was nothing either player's defender could do to stop them.

Kind of like the classic scene from the movie, Billy Jack, where the main character played by Tom Laughlin tells his enemy that he is going to wop him on the side of his head with his foot and telling the opponent, "There's not a damn thing you're going to be able to do about it!" And as seen in the video below (at 1:02), Laughlin does just that.

In the NBA, if you are going to brag and trash talk, you had better be able to back it up with your play. In the late 80's, young high school and college players were often coached not to wipe the bottoms of their sneakers at the foul line, a la Larry Bird, unless they were very, very good, thus avoiding ridicule by opponents when their level of play didn't match the cockiness.

We still don't know just how good Brown is because he has not yet peaked. He is only 21 years old and still learning and improving - and gaining confidence. I can just imagine Jaylen saying the following: "I'm going to take this ball to the hole and jam it. And you want to know something? There's not a damn thing you're going to be able to do about it!" He used to be so quiet.