Jaylen Brown notched his first two points on a layup in the first six seconds of yesterday's Game One against the Cleveland Cavaliers and led the Celtics to an 18-point lead (36-18) at the end of the period. 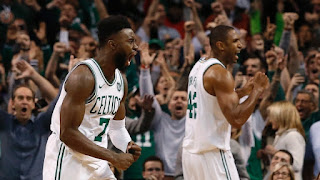 Brown ended the first quarter with 13 points on 5-of-8 shooting while grabbing five boards. He was active and it looked like there are no after-effects from his hamstring injury.

Cleveland was able to cut Boston's lead to 14 points, with the score 78-64 at the start of the fourth quarter. The Celtics countered the threat with an 18-4 run, led by Jayson Tatum's seven points. Both Marcus's (Smart and Morris) added five and four points, respectively, to the cause, and Terry Rozier added two points in the run.

Jaylen had an excellent game and we are glad he is healthy. He was high scorer for the game with 23 points, followed by Marcus Morris with 21 and Al Horford with 20. Brown's scoring and rebounding were critical in the early going, and Horford's play and energy fueled the 17-0 surge later in the first period.

As seen in the above tweet, the Brooklyn Nets have to be lamenting the trade that ended up sending the Jay-Team to the Celtics via the draft picks. I cannot envision this tough and talented Celtics team without Jaylen and Jayson.

Photo via The Canadian Press