Celtics playoff run comes to an end, fall to Cavaliers 87-79 in Game 7 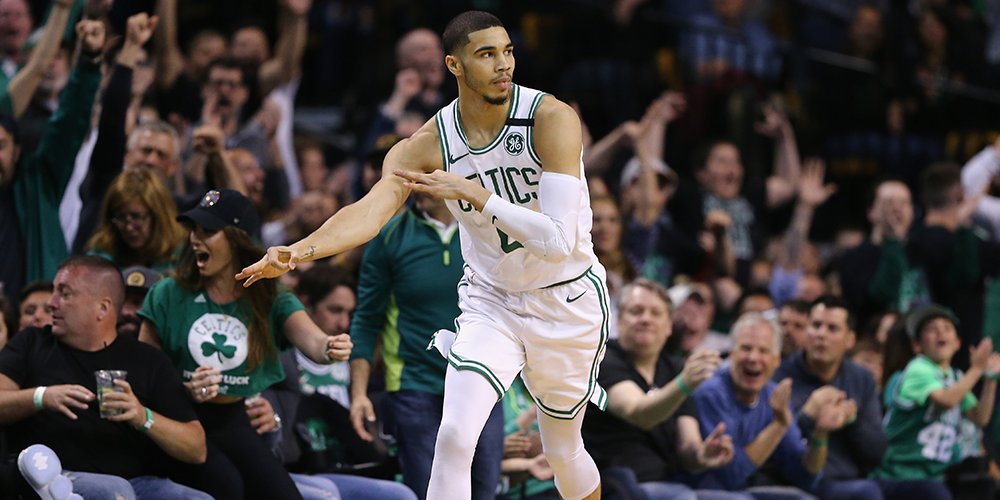 A back-and-forth, competitive Game 7 of the Eastern Conference Finals saw the Boston Celtics coming up short against the Cleveland Cavaliers 87-79. It was an intense game all the way through, with Jayson Tatum (24/7) and LeBron James (35/15/9) putting on a show for their sides. Ultimately, though, it was the Cavs who ended the Celtics' season at the end of the night.

As expected, the Celtics came out energized on their home floor. They were active on both ends and looked sharp out of the gate.

Tatum, Boston's leading scorer through this whole series, continued to think nothing of his "rookie" label. The 20-year-old poured in seven of his team's first 11 points, courtesy of three smooth jumpers and this step-back that left Tristan Thompson icing his ankles:

This kid is special. pic.twitter.com/Vb6z03g1nj

Once he got the defense's attention with his perimeter game, he kept them honest with this strong drive and flush at the rim:

Tatum flies in for the jam! 💥 pic.twitter.com/eCtQZVeRSU

It was a good sign for Boston's offense that not only Tatum was getting a lot of shots, but also their anchor, Al Horford, who provided eight points and his typical all-around presence.

For the Cavaliers, it was a one-man show to start, and I'm sure you can all guess who was the feature in this film. LeBron James, in seek of his 8th straight trip to the NBA Finals, scored 12 of their. More than seven minutes into the contest, James was the only one who had scored for Cleveland, and he went on to put up 12 of their first 16.

Brad Steven's unit closed the quarter on a 9-0 run, taking an eight-point advantage into the second:

Whether it was the hostile environment or just an off night, the Cavs struggled with their shot. Kyle Korver - a three-point assassin on most nights - missed multiple wide open attempts, while Jordan Clarkson and the rest of the supporting cast missed out on some good looks as well. As a team, they were shooting 1-14 (7.1%) in the middle of 2Q.

Unfortunately, the Celtics ran into a similar wall. They shot 5-17 from the field and 1-7 from deep, leaving the door wide open for the Cavs to make a run - and that's exactly what they did. LeBron's supporting cast finally showed signs of life, contributing with a handful of buckets to cut the Celts' lead to just one.

In what was an ugly half from beyond the three-point line, Boston finished on a high note thanks to a Jaylen Brown trey that handed the green a four-point edge over Cleveland at the half:

Al Horford is 6-for-7 from the field for a team-high 14pts, followed by Jayson Tatum with 11pts/5reb. Brown: 8pts; Morris: 7pts. James: 17pts for Cleveland. pic.twitter.com/kPKrLCE6IV

Shooting woes carried into the third for both squads. A lot of points were left on the table as the low-scoring affair continued. Mid-way through 3Q, things started picking up.

Boston wisely began attacking the basket more frequently rather than settling for outside shots. This paid off with a few scores. Meanwhile, the Cavs just started hitting shots, with Jeff Green, JR Smith, and company knocking down their looks.

Although Marcus Smart's shot was off this game (not a huge shocker), he provided his usual grit and hustle. I don't even know what to call what he did here - a rebound? Steal? You be the judge, but either way, it was a big hoop that the C's needed:

If at first you don't succeed... pic.twitter.com/R7fQfw3nIm

The stagnant third quarter offense for Boston resulted in a mere 13 points, while Clevleand scored 20. One LeBron 28-footer was the only thing separating the two teams at the end of the third:

The final frame brought a bit of a rejuvenated offensive game. Boston and Cleveland combined to make their first five shots, bringing multiple lead changes with it.

For the C's, this offense was ignited by a monster and-one alley-oop finish by Horford:

Mid-way through the final frame, the Celtics found themselves cooling off and losing momentum with the Cavs up four. However, Jayson Tatum came up huge with five straight points and one absolute baptism of LeBron:

With four minutes remaining, Tatum had already scored nine fourth-quarter points. Coming down the stretch, however, the Celtics missed on countless opportunities. They had their chances. They had their looks. The ball was just not falling for Boston when it mattered most. This slowly built up, as the Cavaliers inched closer and closer to the Finals as Boston hung on for dear life.

The Celtics went into panic mode late, hoisting up ill-advised threes in hopes of holding on. They were 7-39 from three on the night, highlighting their late game struggles and, despite many chances, couldn't convert in the closing minutes.

The Cavs dribbled out the clock to end the Celtics season with a final score of 87-79.