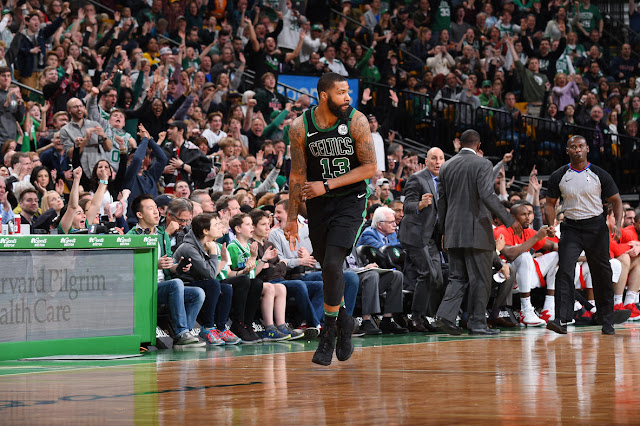 When news broke we traded Avery Bradley for Marcus Morris, I was not happy.

Most of you weren't, either - and can you blame us? Bradley had been a crucial component of the Boston Celtics' defense since the "Big Three" era, the team's elder statesman (at all of 27), and the definition of professional while also taking steps forward in his game almost every season since entering the game. He seemed poised for a breakout season.

How nuts is it that Danny Ainge gets put in a tough situation where he HAS to trade Avery Bradley, and he gets a guy that fits PERFECT in Marcus Morris. What freaking crystal ball is that dude looking into that we can't see.
— Ian Barber (@Ian11Barber) April 1, 2018

We know what happened next, and why - he got sent to the Detroit Pistons for Mook, who cost less (letting the team sign Gordon Hayward), and was under contract for a startlingly low-cost deal for a season longer. Avery looked like he was going to get himself a Brinks compact car, which while compact, was almost certainly too heavy to cross the bridge from this season to the next (translation: Bradley was probably going to get paid more than Danny Ainge was willing to pay).

I knew landing Morris wouldn't be all bad - he had a solid if outdated game, worth significantly more than his $5 million-dollar paycheck - and we got Hayward, right? Little did I know those assumptions would be off the mark, though in ways few of us could have guessed.

While Hayward was only with us for five minutes of game time (so far - fingers crossed) this season, it was Morris' own leg that had me skeptical early in the season he'd ever be more than a solid rotation option who could guard prolific scoring combo forwards from Akron, Ohio when called on to do so. I never really envisioned Mook becoming one of our primary and most efficient sources of offense - not even for a second.

But, last month, that's exactly what happened - Morris, healthy and available, stepped up and demonstrated he's not only a valuable player on that deal - but a valuable player, period. Down not just Hayward, but Daniel Theis and - for much of February - Kyrie Irving, Marcus Smart, Jaylen Brown - and even Al Horford, for a game or two. We could have also been down Avery with no #HayWatch to look forward to (and let's not think about what it'd be like to have hung onto Isaiah Thomas).

This could have been quite the lost season, in so many different ways.

Don't get me wrong - it really, really sucks hard that so many guys I - and many of you - have come to think of as part of our Boston sports family are hurt. It'd suck much worse if the organization that brought them into that community was hamstrung for multiple seasons, wrecking one of the more impressive rebuilds in the history of the modern NBA in the process, with few remaining tools to rebuild with.

But that's not what happened. Instead, somehow, Danny managed to get his hand on a time machine or palantir or who the hell knows how he navigated this mess of injuries as well as anyone could reasonably expect to have the Celts poised to still be in contention for Banner 18, and Marcus Morris has been a major - if not the - reason that's the case.

Trading for him in the first place, rocky road that it's been, gave him the chance to keep the Cs afloat when we could have seen Boston end up in a free fall. Counterfactuals being what they are, there's no way to know if injuries like those affecting Bradley - now on his third team in less than a year after groin injuries diminished his utility substantially - would have played out the same way for those on the team today, but what we can say about the team we do have while being thankful for potentially dodging disaster several times over is Mook's play in February.

Sure, he still pounds the ball a bit more than he should, and eats more from ISO ball than he probably should. He still takes midrange shots that could have been threes, BUT: he's been every bit as solid as usual on defense, and, more importantly, has been hitting 48.3% from the floor, compared to 43.5% over the whole season and a career average of 42.9%. And on a team starved for offense in Kyrie's absence, his February average of 18.9 points per game (compared to a season-long 13.6 points per game) has been arguably the most important development of the month, and quite possibly the season.


He's been an emotional leader for what could easily be a demoralized squad, especially after early-season success raised expectations even after Hayward's injury. It was on display last night against the Toronto Raptors, and in several close games this month Boston probably should have lost. We must, of course, credit Brad Stevens for drawing up plays and working out rotations that gave Mook the chance to succeed in the first place (Coach of the Year much, Brad?), but that doesn't take away anything from Morris - the "next man up" ethos is what makes this team tick, after all.

Now that we've sung the praises of a player I and many of us looked at as a necessary move for future growth as a vital component of the present, I present to you a true and honest assessment from the man himself:

✅ Ejected in the middle of free throws