In Part 1 of this series, I did a twitter poll on the position that the Celtics should focus on when drafting at the #27 spot in the upcoming draft. The vote was heavily in favor (73%) of drafting a big man, with ball-handler coming in second at 15% and wing third at 12%. 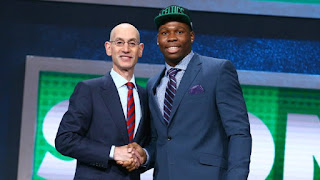 Many comments centered around the fact that drafting for talent rather than need was the best course this late in the first round. I totally agree with that. But the purpose of these polls is to find what needs are seen by Celtics fans. My recent article on the possibility of Jayson Tatum at the center position indicated that Boston has a wealth of talented wings, and Jayson gaining more strength and muscle could allow him to take over the five-spot on certain match-ups.

The team has four prime ball-handlers right now, but two (Marcus Smart and Shane Larkin) are not yet signed for next season. This poll will focus on the type of player (rather than position) that Boston should look for in the draft, disregarding the fact that they should draft for talent over need.

Early in the season, the Celtics glaring weakness was on the offensive end. That has changed, even with their best clutch shooter (Kyrie Irving) out with injury. The youngsters have stepped up in that category, including the playoffs. Defense is the battle cry for Brad Stevens and that will always be a constant. The addition of center Greg Monroe has improved Boston's rebounding. Kyrie Irving, Marcus Smart and Al Horford have been the prime assist men, and Terry Rozier has improved his passing game. The choice is yours. The duration of the poll will be two days.

What position should the Celtics focus on with the #27 pick in the 2018 NBA draft?

What type of player should the Celtics focus on with the 27th pick in the 2018 NBA draft.