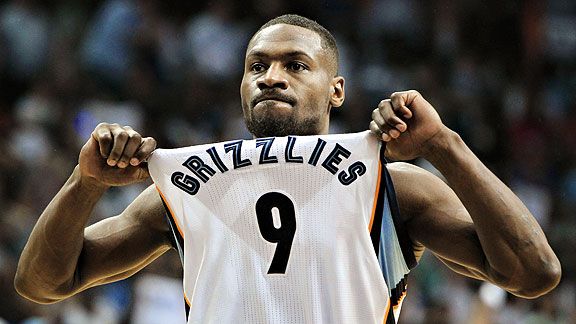 Defensive minded NBA players rarely get acknowledgement while on their way out of the league, however there are few exceptions. On Thursday, The Memphis Grizzlies announced they will be retiring Tony Allen's No. 9, when the day comes that he decides to retire.


"We are proud that @aa000G9's #9 jersey will hang in the rafters of @FedExForum alongside Zach’s one day.”https://t.co/hEpfJDtuYe pic.twitter.com/zc2UuIOcgL
— Memphis Grizzlies (@memgrizz) October 12, 2017

The Grizzlies organization will be sending off Randolph and Allen, both players who have always stood for "grit and grind."  These two players, with the help of Marc Gasol and Mike Conley, helped elevate the franchise to modern relevance.

Allen has always been humble when it comes to things like this. He won a ring with the Celtics as a young, athletic guard coming off the bench 10 years ago. After signing with the Grizzlies, Allen admitted that he couldn't return to Boston because he felt overshadowed by superstars like Ray Allen and Paul Pierce.

He was the Grizzlies defensive captain and the leagues lock down perimeter defender, being named to three All-Defensive First Teams, and a trio of All-Defensive Second Teams during his time with the team.