The Chicago Bulls thrash the Boston Celtics in game 2, 111-97 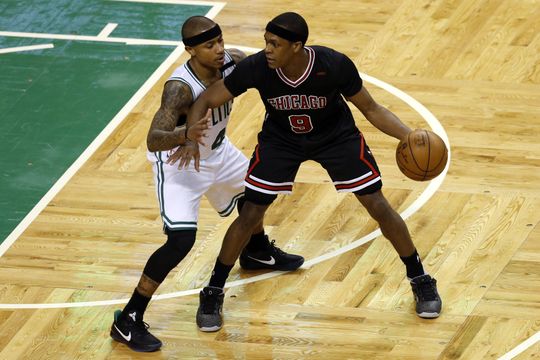 Our old pal Rajon Rondo led the Chicago Bulls into the TD Garden and thrashed the Boston Celtics, 111-97. Rondo was masterful orchestrating the Chicago offense to the tune of 11 points and 14 assists. He came up one rebound shy of a triple-double and swiped 5 steals to boot. Jimmy Butler and Dwyane Wade chipped in 22 points a piece and Robin Lopez dropped 18 points on 8 of 11 shooting to go along with 8 rebounds.

For the Celtics Isaiah Thomas scored 20 points on 6 of 15 shooting (1 of 5 from three and 7-13 from the line) and Al Horford only came up with 7 points to go along with his 11 rebounds. The C's got completely outplayed in just about every stretch of the game and never got into a good rhythm offensively for more than a few plays at a time.

Isaiah buried the first shot of the game and the Celtics got off and rolling to a 7-0 start, but the Bulls rattled off a 9-2 run in response behind 4 offensive rebound in the first 3 minutes of the game. In fact that Bulls run continued throughout most of the 1st quarter, and the game was looking very much like the worst parts of Sunday night's game:

This looks a lot like Game 1 right now, except the Bulls are hitting their open shots this time around.
— Brian Robb (@CelticsHub) April 19, 2017

Nikola Mirotic scored 10 points on 4 of 6 shooting and Rajon Rondo was looking like he was in National TV mode with 6 points and 6 assists in the 1st. After trailing by as many as 12 the Celtics managed to close out the quarter only down 5.

Brad Stevens went 9 deep on his bench and got a little boost from Terry Rozier who didn't play in game 1:

The Celtics run continued into the 2nd quarter and that Bulls lead was gone with with 9:04 to play in the half and the two teams knotted up at 36. Marcus Smart was doing a little bit of everything, including playing cleanup on the glass on both ends of the floor:

The Bulls responded with another dominant stretch and a 14-3 run sucking the air out of the TD Garden along with it (50-39, Bulls). Rondo continued to lead the Chicago charge finishing the first half on his way to a triple-double with 8 points, 9 assists, 5 rebounds and a pair of steals.

Although Smart was probably the most effective player in the opening half for the Celtics (6 points on 3 of 4 shooting, 6 rebounds, 2 assists) it was Thomas who lead the team with 11 points despite shooting a paltry 2 for 7 in the half.

The Bulls beat up the Celtics on glass yet again (28-20) and they couldn't finish around the bucket - they missed 8 shots at the rim and at least half of those were layups. All that coupled with some poor shooting (40.5% for the team) and the C's were lucky to be heading into the break only trailing 54-46:

Stevens elected to go to the seldom used Tyler Zeller in the place of Amir Johnson to start the 2nd half and the early results were great. The Celtics came out on fire, hitting 6 of their first 8 shots knocking the Bulls lead to 1 (60-59) in the first 4 minutes prompting a Chicago timeout, but the Bulls would rebound (pun intended) again. A 17-5 run would give Chicago their largest lead of the night at 14.

The worst was yet to come for the Celtics. The 4th quarter would prove to be the most demoralizing of them all. The Bulls continued to knock down shots and the Celtics continued to look like a complete mess. The Bulls only outscored the Celtics 25-21 in the quarter but that doesn't begin to explain the embarrassing finish to the game. The Celtics offense relegated to launching three-pointers and missing them, or when they did take the ball to the bucket and draw contact they missed the free-throws. The Celtics shot 57.9% from the free-throw line, the Bulls shot 51.1% from the field.

Tonight is the first time in Isaiah's career that he has missed six free throws.

Boo birds coming down on the Celtics right now at TD Garden...

Deservedly so. The Celtics find themselves in a 0-2 hole with two games in Chicago on the horizon. They'll play game 3 Friday night at the United Center, tipoff is at 7pm.