Everything has been coming up green for that #1 seed 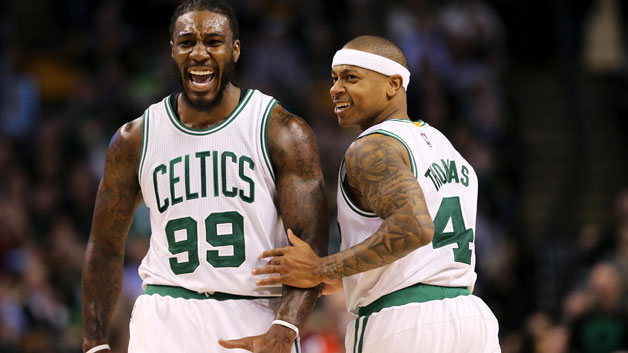 With a win tonight against the Milwaukee Bucks the Boston Celtics would clinch the 1st-overall seed in the Eastern conference for the first time in nearly a decade. It also just so happens that the Bucks really have nothing to play for tonight. The Atlanta Hawks won last night, clinching the 5th seed in the process and leaving the Bucks locked into the 6th seed - so a win over Boston tonight does nothing besides perhaps add a little more swagger in their step heading in to the postseason. In fact Bucks coach Jason Kidd has decided that he's going to rest some key starters for the game. Four of them didn't even make the trip to Boston:

Brad Stevens has said recently that he felt the Celtics were in good shape heading into the postseason, and getting rest for his guys wasn't so important for them. With The 1st seed on the line you can bet the Celtics starters will be out their tonight and ready to go.

Should the Bucks somehow manage to pull off the upset the Celtics still have a good shot to take home that 1-seed. That's because a Cleveland Cavaliers loss would also clinch it for them. With the Cavs set to rest their stars tonight as well and the Toronto Raptors aren't planning on resting anybody according to head coach Dwane Casey:

Nobody will rest tomorrow, per Casey.
— Blake Murphy (@BlakeMurphyODC) April 11, 2017

Pretty wild since just a week ago today after losing to Cleveland at home it looked like a real long-shot for the Celtics to pull away with the 1st-seed, but here we are. After losing both ends of a back-to-back to Cleveland and Atlanta the Celtics have won their last two, while the Cavs have dropped three straight - including two in a row to that same Hawks team that has closed on the year on a helluva the run after playing like crap for quite some time.

Al Horford says the is approaching tonight as any other game, but would really like to finish the regular season a high-note. Via Jay King of MassLive:

"It really is just a game," Al Horford added. "I think that we're in a really good position. It's not like we're fighting for our playoff lives. But at the same time it's a nice opportunity for us to come out and get a win and finish out the season - the regular season - the right way."

It seems like a near-lock that the Celtics will pull away with the 1-seed one way or another at this point, but you never know the way this roller coaster finish has gone.