Scola joins Jones, others in a busy buyout market Celts should explore 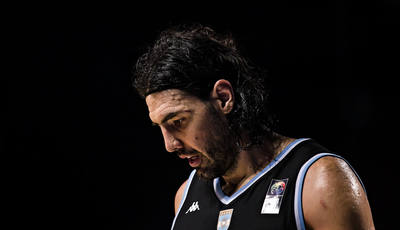 The Brooklyn Nets have decided to move on from Luis Scola, which should help the Boston Celtics' draft odds a little, if nothing else.


However, Scola also joins a deep buyout market, far deeper than usual - perhaps because of the massive influx of television money and the fallout it has had on rosters since. Most players who end up on the buyout market have a lot of warts, due to age, injury history, disposition, or some combination thereof. Scola definitely falls into this category, but not all of them do. Still, teams can sometime find value even in these "warty" sort of players so long as the cost - usually a veteran's minimum salary and a roster spot, though occasionally requiring multi-year deals - is not too much. For Boston, even cutting a player is actually a wrinkle that gives them pause.


There is a starting 5 in free agency better than the Nets...


The team has no open roster spots, though it does have a little money to throw around. They also have a lot of picks in this and following drafts (in case you weren't aware, haha) and free agency aspirations to consider to boot, so adding multi-year deals is very unlikely. To make things even more complicated, a few true contenders (the Golden State Warriors and Cleveland Cavaliers) are willing and able to pay through the nose as they circle the market like sharks in search of the one piece that will put them over the edge.

This means the cream of the buyout market - players like Andrew Bogut and Deron Williams - are almost certainly off the table. And for some of them - such as Matt Barnes, a victim of the DeMarcus Cousins trade, or Jared Sullinger, whose poor health is as much the reason as the moves by the Toronto Raptors to address his absence was - the warts that likely contributed to their presence in the buyout market is arguably too much of an issue to consider cutting a player from the Celts' roster for.


Others, like new arrival Brandon Jennings - or under-performing Mike Scott - are bad fits, and even Scola, a consummate professional, seems like an exceedingly unlikely candidate for cutting players from the roster in exchange for three or four boards and a pair of buckets for thirty-something games. James Young, the only borderline player on the roster with no guaranteed money to consider unlikely to be in green next season, is finally out-producing his rookie-scale contract, if just barely. So, any signing would have to have higher upside than Young does - theoretically not too difficult, but given the other factors Boston needs to consider (roster limits, cap space and how it will impact free agency goals, etc.), there's really only two potential options.

The worse of the two, Omri Casspi, does have the potential to be resigned for a season or more if free agency doesn't work out the the Celts are hoping it does, and as a combo forward with a decent shot (career .369 from three) who can rebound alright and will be under 30 next season, would likely be one of the top tier options in the buyout market. However, he's also got a broken thumb, which will have him out until the last week or two of the regular season. He would provide valuable playoff depth, though, so it's not inconceivable Danny Ainge would consider adding such a player.

The better option, however, is Terrence Jones, who we were among the first to suggest Boston might have interest in. Much like Casspi and Barnes, Jones has fallen into his current predicament because of the Cousins trade, but is also young, athletic, positionally flexible, a competent if not great shot, and solid rebounder and rim protector. If there is a single player who would fit Ainge's plans and value-seeking history, it's this guy. Of course, Larry Sanders is yet another (non-buyout) option to sign before the March 1st cutoff date for playoff eligibility - and has reportedly been playing better than the supposedly disappointing showing he had with the Celts - but Boston has kept away from risky moves in terms of chemistry to date, and the likely high asking price of signing such a player may be as much of an issue as his conditioning and history is.


The Cavaliers, Wizards, Celtics, Rockets and Clippers are buyers. Keep an eye on them at the deadline and as veterans are bought out.
— Alex Kennedy (@AlexKennedyNBA) February 21, 2017


Don't get your hopes up we'll be seeing any new faces on - or off - the roster come the postseason, but there's at least a few options that won't sacrifice the club's prized flexibility for a little deeper of a playoff run.

For more stories about buyouts on CelticsLife, click here. For more by Justin, click here.
Related - this week's Celticslife Podcast.

Photo via solobasket.com
Data via basketball-reference.com
Follow Justin at @justinquinnn