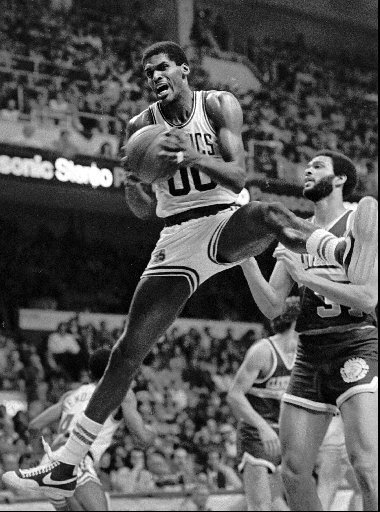 One of 11 on the night for Parish in a 102 - 88 win for the Boston Celtics over the New Jersey Nets (they were still many years from their move to Brooklyn), Robert became just the ninth person in league history at that time to reach that many boards. He is currently in eighth place with 14,715 boards, and unlikely to be unseated from that lofty place any time soon, with Dwight Howard being the next closest active player, currently sitting at 11,567 boards. In remembrance of this record achievement, here's a video of Parish surprising former teammate Kevin McHale on GameTime:

Also, on today's date in 2001, Former Celtics head coach and President of Basketball Operations Rick Pitino decided to resign his positions after a frustrating and largely unsuccessful attempt to steer the franchise out of the wilderness over the previous three and (nearly) a half seasons. Pitino, according to ABC news' Jimmy Golen, said of his decision to resign:

"Sometimes change is good just for the sake of change when things aren’t going well ... It’s heartbreaking to me, what’s happened here. I love the Boston Celtics and I’ll always be a fan ... This organization has treated me like royalty since I came here. But you know, I’ve been going at this pretty hard now for three and a half years and I haven’t seen many results. It hurts, but life goes on and it will for the players and for the people in this organization."


Pitino was replaced by then-assistant coach Jim O'Brien, who managed to keep the team above .500 for the remainder of the season, eventually becoming Boston's 14th-ever head coach after having the "interim" title dropped in recognizance of his success. As a reminder of the tenor of that era, here's the infamous press conference that perhaps most emblematic of Pitino's time in Boston.