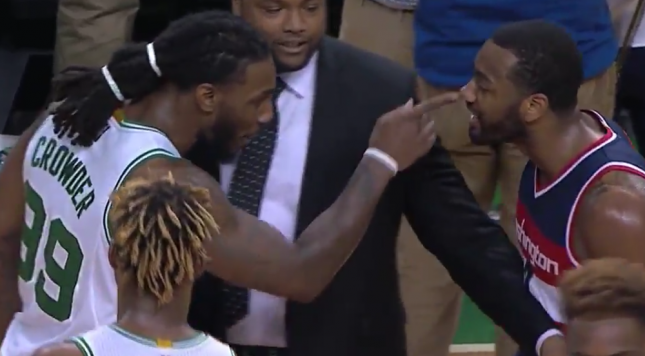 Both Jae Crowder and John Wall were fined for their roles in the incident following last Wednesday's Celtic's win over the Wizards in DC. While Wall was fined $15,000 for his part in the altercation, Crowder was hit with a steeper penalty of $25,000 for his:

Although it was essentially Crowder that initiated the physical aspect of the confrontation with his finger mushing Wall in the nose, the Wizard's point guard's retaliating slap was certainly done with a little more menace behind it. So it seems kinda of strange that Wall's penalty was significantly less than Crowder's, but based on the NBA's statement on the fines we may not have seen the entire altercation. Via USAToday.com:

During the incident, Crowder, who was fined $25,000 for "a postgame confrontation on the playing court" and for "attempting to escalate the situation after exiting the playing court," pointed in Wall's face and made contact with his nose. Wall, who was fined $15,000 for "his role in the confrontation on the court," retaliated by swinging at Crowder.

Five Boston police officers standing between Celtics and Wizards locker room after teams were barking at each other after buzzer.
— Chris Forsberg (@ESPNForsberg) January 12, 2017

Apparently their was another incident off the court that we didn't see, as the police presence would seem a little extreme just based off of what we saw on the court. That would certainly explain why Crowder is on the hook for a steeper penalty.