Tommy Heinsohn talks coaching, broadcasting, and how he almost left the Celtics 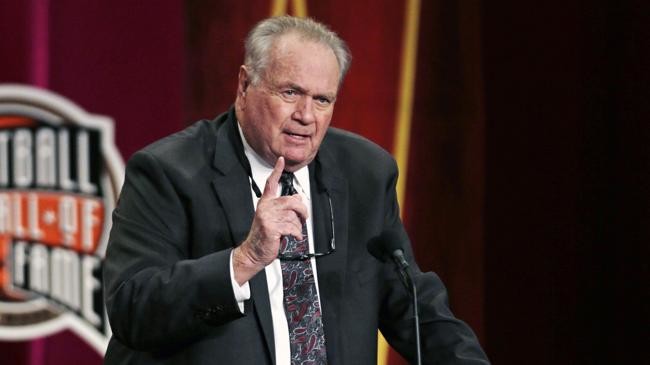 Tom Heinsohn has been a part of the Celtics orgnization for 60 years. He is the only person in team history that has officially been apart of each and every one of their 17 championships. He's been inducted into the NBA Hall of Fame as both a player and a coach, and today serves as the teams lovable color commentator alongside Mike Gorman on the CSNNE broadcasts of Celtics games. Heinsohn is a fan favorite in Boston, as his green-slanted takes on the games, and especially the officiating, can often project just what C's fans are thinking at the moment. As fun as Tommy can be on the broadcast, there's very few people that have the wealth of basketball knowledge that he has. He recently sat down with Chris Mannix on The Vertical Podcast and talked about a ton of different topics, including the current state of the Boston Celtics:

"This is what you should be doing, you know? I mean, how many teams do you see that have some players, and then all of a sudden they try and get band-aids to patch it all together. Danny is getting players that can be developed in his mind, and they look to be mostly competitive people...They're willing to be part of a team." said Tommy. "And then Brad is the perfect coach, because he knows how to bring players along. Now Doc Rivers is a terrific coach, but he didn't bring players along, right? Brad is an ex-college coach who was into developing players in college, over four years. So it's natural to him." Tommy claims, "A lot of these players have grown, and I'm amazed at times when he plays certain guys. They may not make a total impact, but that's necessary, from my own management experience, to put em in there. That you believe they can get the job done. That's the first thing a player has to learn, that I belong."

Heinsohn retired from playing in 1965, and began broadcasting Celtics games the following season alongside his former coach and friend, Red Auerbach. After three years on television, Tommy took over as Celtics head coach in 1969, leading the team to two NBA titles over nine seasons. He was fired in 1978 by the Celtics owner at the time, Irv Levine; a man who infamously swapped his ownership of the Boston Celtics for the Buffalo Braves (today's LA Clippers) later that year.

"I called him Irv the Swerve," joked Heinsohn. "He had no feel for what basketball was all about."

The breakup nearly ruined Tommy's relationship with the Celtics:

"Politics, when things aren't going well...becomes horrendous, and I'm not a political person. You don't want me? See ya later. I'll do something else." 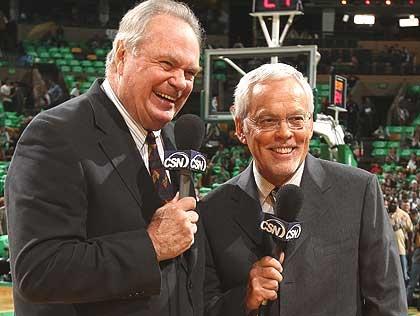 However Heinsohn and the Celtics were able to mend their relationship, and in 1981 Tommy joined Gorman on the television broadcasts in the role that we know and love him in today. But did you know that there was a time in the 80s when Heinsohn used to be a part of the NBA's playoff broadcasts on CBS, and he had to provide an unbiased analysis? It happened, and Tommy had an interesting way he prepared for those games - by using his coaching experience to separate himself:


"I would get scouting reports of both ball clubs, the week before. And then I would imagine me coaching both teams, and exploit the weaknesses of each team." On doing the Celtics and Lakers matchups in the finals Tommy joked, "I actually had a tie made that was half green, and half purple. Just to show I was impartial."

Mannix also asked Tommy about his pick for greatest coach of all time, between Auerbach and Phil Jackson. Although you probably won't be surprised by his answer, his reasoning is actually very sound:

"We're gonna find out what Phil really is to the game of basketball with what he does in New York, because Auerbach was a builder of teams. He put the teams together. Whenever I'm asked that question I give homage to Phil Jackson, but he was inserted into teams that were already developed and ready to peak." claimed Heinsohn. "He took adavantage of...he never built a team. This is the first time down with the Knicks that he will be part of building a team. Red Auerbach did all that."

It's always interesting to dive into a great basketball mind, and Heinsohn in particular has been somehow tied to nearly every significant part of the Celtics storied history. Whether he's screaming at referee Tony Brothers from the sideline or handing out a Tommy Point for a big time hustle play from Marcus Smart, Tommy has a passion for basketball and the Celtics that is about as genuine as you can get.