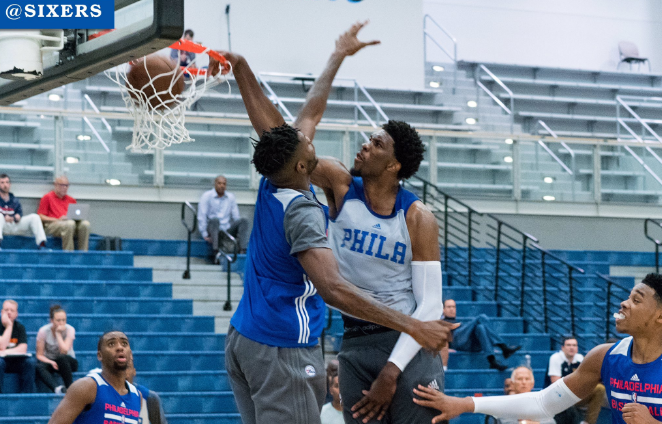 The Celtics take on the 76ers tonight in the preseason opener for both squads.  While the Sixers are technically the home team, the game will be played at UMass Amherst at 7 pm.

Philadelphia is missing the No. 1 pick in the draft, Ben Simmons, who's out at least three months after having surgery to repair a Jones fracture in his right foot.  A recent rumor suggests Simmons' agent may even push for him to skip the entire season.

The Sixers will also be without the services of their top pick from last year, Jahlil Okafor (No. 3 overall), who's dealing with a lingering knee injury.

However, the player Philly took at No. 3 in 2014 will finally make his NBA debut this evening (sort of):


Embiid will be limited to 12 minutes tonight, used in segments not consecutively.
— Jessica Camerato (@JCameratoCSN) October 4, 2016


Sixers coach Brett Brown is being very careful not to set the bar too high for Joel Embiid:


Brett Brown says he wants to see Joel Embiid, who will have minutes monitored, simply run floor. Thinks he has chance to be amazing leader. pic.twitter.com/tADjYIkeyT
— Brian Seltzer (@brianseltzer) October 3, 2016


Run the floor, huh?  I guess it's good to start with simple goals.  With Okafor out and Embiid limited to just 12 minutes, at least for tonight, Nerlens Noel won't have to worry about Philly's logjam at center (Noel was the No. 6 pick in 2013, by the way).

For the Celtics, Kelly Olynyk is not yet cleared for game action following offseason shoulder surgery, and Gerald Green may or may not suit up following a hip flexor strain last week.