What the Hell Happened to...Ricky Davis? 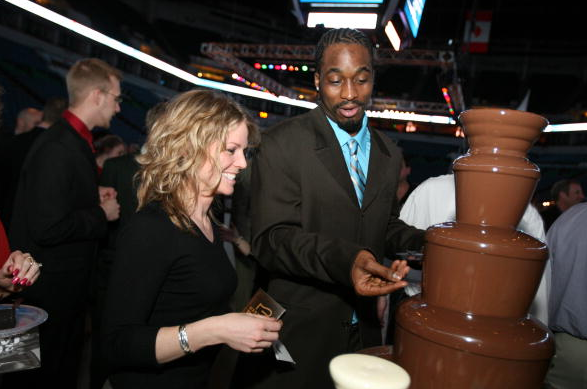 "I thought LeBron James was just going to be another addition to help me score."- Ricky Davis


According to the dictionary, the definition of the word "misunderstood" is: improperly understood or interpreted; or not appreciated.  You start reading too much stuff online and the stereotype behind a guy takes on a reality of its own.  You see it firsthand with Kermit Washington.  In this commemorative 200th edition of What the Hell Happened to series, you see it once again with Ricky Davis. 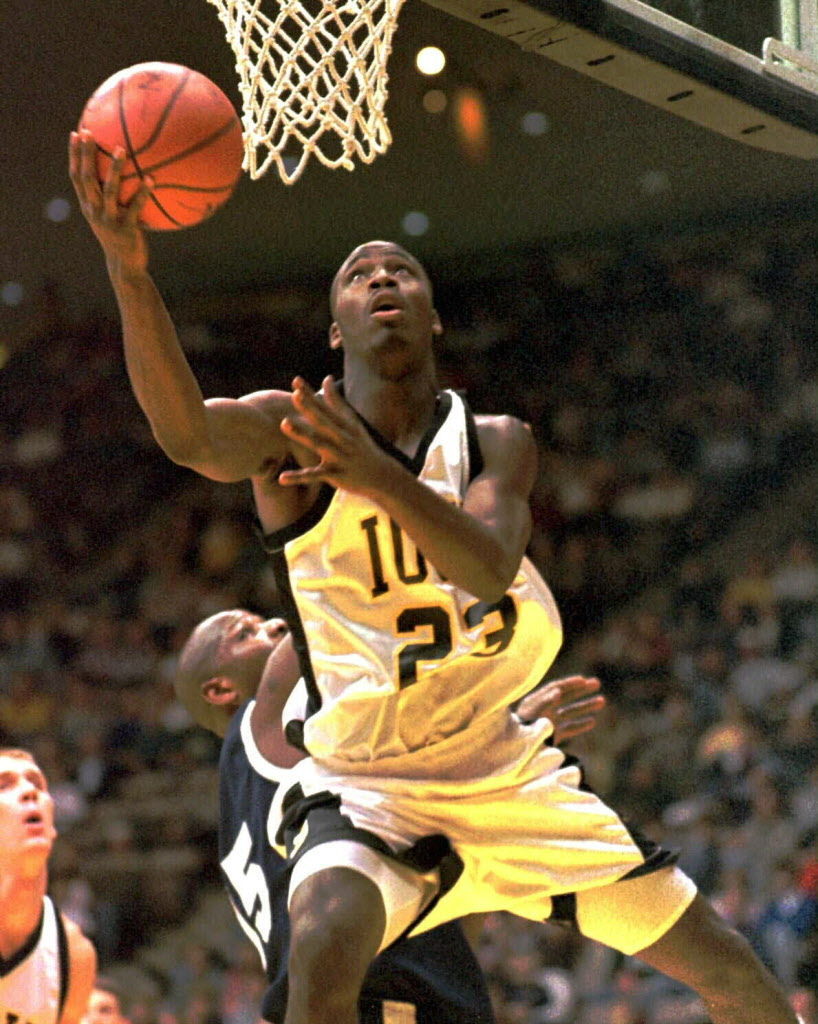 Ricky Davis was born in Las Vegas but went to high school  in Iowa.  He's arguably the best professional basketball player from Iowa.  After graduating Davenport North High School he stayed nearby attending the University of Iowa- for one season, before declaring for the 1998 NBA draft at 18 years old.  He was the 21st overall pick of the Charlotte Hornets that year.

After 2 years of getting sporadic playing time, Davis was moved to the Miami Heat as a throw-in with the Eddie Jones, Anthony Mason for Jamal Mashburn, PJ Brown deal.  But it was in Miami under Pat Riley that he began to develop an appreciation for the game.  Despite being injured and only appearing in 7 games for the Heat, Davis had this to say:

Pat Riley probably is the reason I kind of stuck in the game.  He taught you everything from off the court to on the court, how to eat the right way, how to train, how to handle yourself.  He and Doc Rivers were the best coaches I had. They were hard on you but in a good way.’’


Davis was again moved from the Heat to the Cavs where he caught his break: an opportunity to play.

Yes, I think Ricky Davis was misunderstood.  Even take the opening quote, which I used to start this article.  You see it littered everywhere online with comments pointing to how egotistical Davis was.  Here's the context of that quote, in its entirety:

"I thought LeBron James was just going to be another addition to ... help me score,'' Davis said. "I thought we were going to be a one-two tandem. But I guess I was wrong. Unlike some people think, I really loved the kid. So I'm now running behind Paul [Pierce]. That should get me more open shots.''


See?  Do a little digging and Ricky Davis isn't that bad a guy.

I mentioned Kermit Washington in the opening paragraph.  For him, it was all about the punch.  I refused to mention it in his article.  Meanwhile do a search for "Ricky Davis" and undoubtedly the "triple-double" incident populates.  It was a bonehead thing for him to do.  I'm not going to elaborate more on it than that.  I will remind you Ricky wasn't the first to do something questionable like that to reach a triple double and also wasn't the last: Anthony Bowie or Bob Sura anyone? 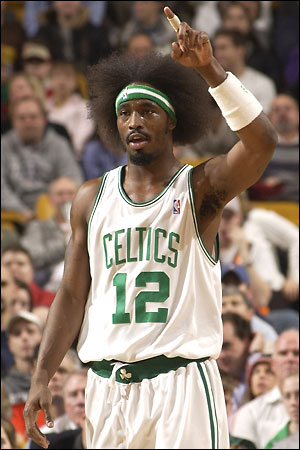 That triple-double incident happened when he was playing for the Cavs.  Another "Google suggests" when searching is "Ricky Davis Steve Nash" that populates.  That was the vicious dunk Davis threw down on Nash where he showboated and yelled "Oh shit!" upon completing the dunk.  That also happened in Cleveland.

The Celtics acquired Davis, Chris Mihm and the unforgettable Michael Stewart from the Cavs for Eric Williams, Tony Battie, and Kedrick Brown in December of 2003.  It was a contoversial move to say the least.  Moving Williams and Battie caused Celtics' coach Jim O'Brien to resign, citing "philosophical differences" between himself and new general manager Danny Ainge.  In other words, O'Brien loved the defensive tenacity and leadership Williams exuded; Ainge loved the talent that Ricky Davis possessed.

Davis was entertaining in Boston.  His armband said "Get Buckets."  He became a fan favorite early-on with his propensity for flair. He was incredibly athletic, a 42 inch vertical at his peak.  He had good fundamental skills too.  He could come off screens and catch and shoot or take his man off the dribble.  When he was focused, he could be a really good defensive player too.

I had really high hopes for that '05 squad when Antoine returned there.  With all due respect to the 2002 bunch, I believe the 2005 Celtics was the most talented team Boston fielded between 1993 and 2008.  I know Gary Payton was well past his prime.  I know Raef LaFrentz was before-his-time as a stretch the floor big man.  But I really thought they'd go further in those playoffs and the first round loss to the Pacers was really disappointing.

Ricky Davis could play.  People called him selfish and full of himself, but I never quite saw it that way.  I saw a flamboyant guy who had a boatload of athleticism.  The problem was as he lost his ability to jump over people later in his career, he became way less effective.  And of course the unfair stereotypes didn't help his career.  How many people in their 20s do things they later regret?


Fun Ricky Davis fact I'm sure you forgot: when the Celtics acquired him he had been #31 in Cleveland.  Obviously he was going to be interested in that number.  However Davis was acquired on December 15, 2003, the exact same day #31 was being raised to the rafters and retired for Cedric Maxwell.

The following incident may epitomize his time on the Celtics in my mind.  I remember watching this live and thinking how bizarre it was to try and in-between-the-legs dunk, meant for the dunk contest, in the middle of the game:

After completing 3 up and down seasons in Boston, Ricky was traded along with Justin Reed, Marcus Banks and Mark Blount to the Timberwolves for Wally Szczerbiak, Dwayne Jones and Michael Olowokandi.  If you read Mark Blount's WTHHT, you'll remember that Celtics-TWolves game shortly after that trade where Blount skipped around the court playing the game of his life.  You might forget it was Ricky Davis, who hit the game-clinching shot, and showed up the Celtics' bench by holding his follow-through.


It was short-lived in Minnesota for Davis who was traded back to Miami in the fall of 2007.  He played all 82 games in the 07-08 season in Miami but it was right around that time, at age 28, you began to see slippage in his game.  He signed as a free agent with the Clippers in July of 2008 and spent two injury-plagued seasons there.  He was hobbled by a torn patellar tendon that was originally misdiagnosed that didn't help matters.  The Clippers waived Davis after the 2010 season.

For the next four years, he tried to revive his career overseas and in the NBA’s Developmental League. He played in Turkey, China, France and Puerto Rico and spent time with the Maine Red Claws and Erie BayHawks.  He never returned to the NBA.

Did the unfair stereotypes contribute to Ricky never returning?  Possibly.  Face it, Davis wouldn't exactly ever be considered a glue-guy like a PJ Brown, someone brought in late in the season to help a team win it all. 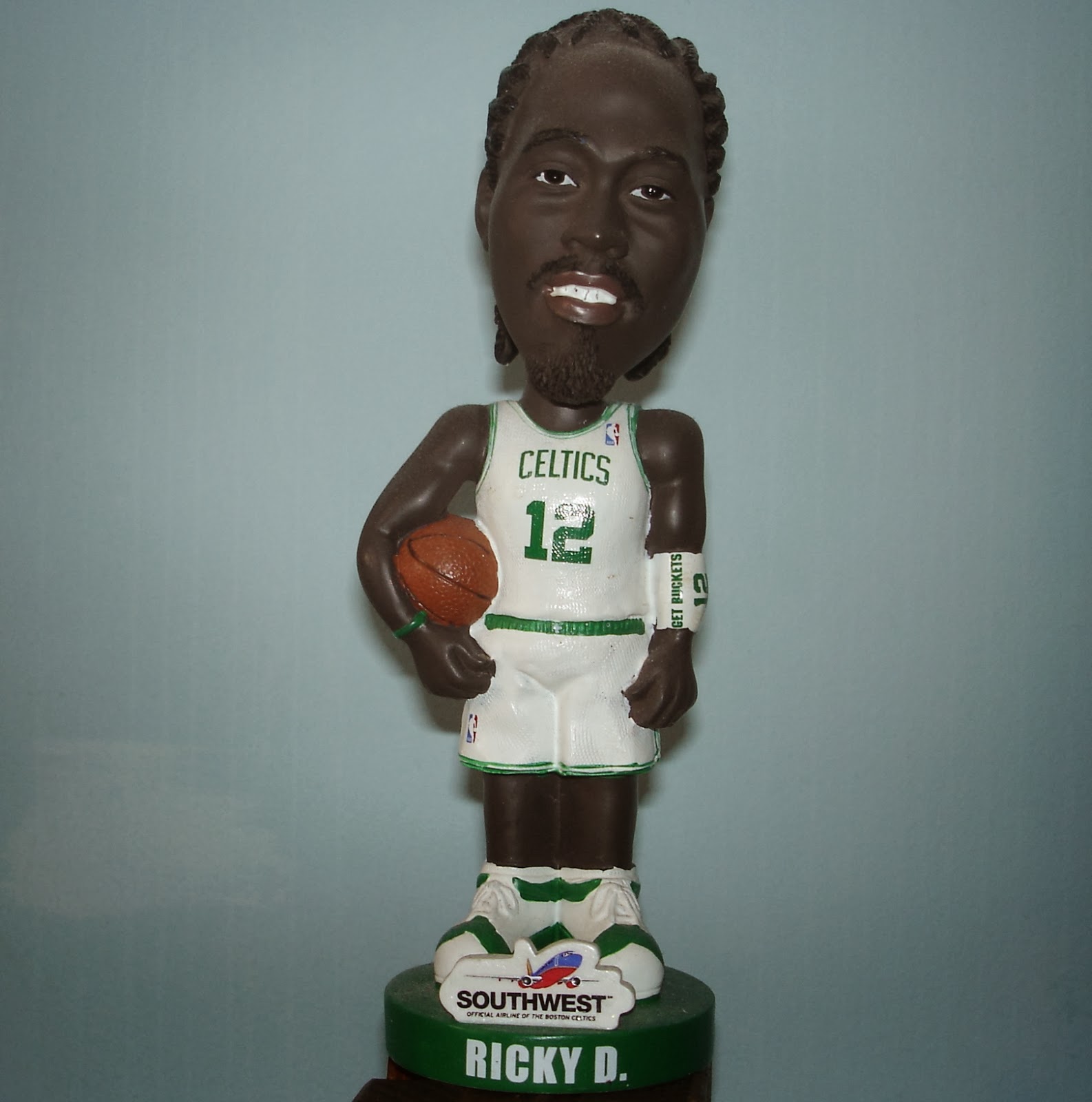 Was it too early to write this article?  Maybe.  But what Ricky is up to today is too amusing to not bring attention to: he bought a 17 acre farm in Pearland, Texas which isn't too far from Houston.  He lives with his extended family including his parents, Tyree and Linda, and his brothers Alonge and E.B.  His wife Siobhan also lives there and you can see in 2014 they had a baby registry.  He has horses, cows and German Shepherds.  He wanted some land.  He said maybe it was because he grew up in Iowa.  Or maybe because it was the opposite of what you thought he'd be doing.

Speaking of Iowa, now we have both Davis and Raef LaFrentz as guys who own farms.

He also stays very involved in the Ricky Davis Legacy Foundation, which you can see does a lot of great things.  He even has mentioned a desire to try and get into coaching.

Not what you expected?  Not too bad for a guy misunderstood.