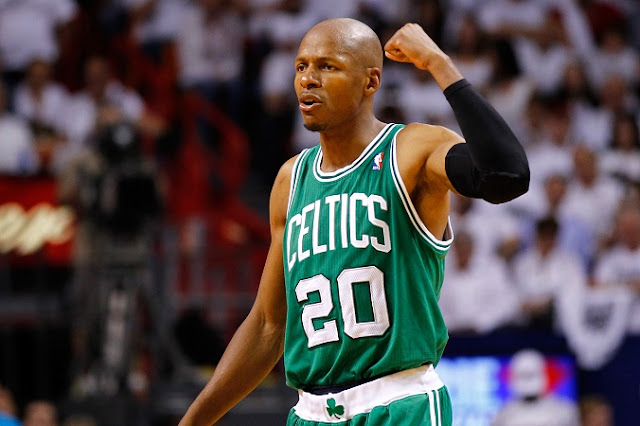 The Hartford Courant took the opportunity to catch up with Allen regarding a potential return to the NBA, as it was rumored earlier this summer that he had interest in signing with the Golden State Warriors, as well as a short list of other NBA contenders.

Instead of mentioning the usual suspects in this weekend's interview -- the San Antonio Spurs, the Los Angeles Clippers, The Cleveland Cavaliers, etc -- Ray claims he has spoken with both the Boston Celtics and the Milwaukee Bucks about a potential return to one of the organizations he formerly played for:

It has been assumed that Allen, who last played for the Heat in 2014, would be most likely to join the champion Cavaliers, reuniting in Cleveland with LeBron James, or the runner-up Warriors, who have added Kevin Durant to the team that went 73-9 in the regular season.

The Spurs and Clippers have been mentioned, also, but Allen said he has spoken with the Celtics, with whom he won a championship in 2008, and the Bucks, his first NBA stop.

"I would love going back to those places if it worked out," Allen said, "because both teams are good, too. It doesn't necessarily have to be championship-or-bust for me to go back to the NBA.

"I want to be in a situation where I thought I could help, play a little bit and help where they have good young talent."


Even if Danny Ainge was considering offering Ray Allen the vet's minimum at around $1.5 million, Boston's roster is already crowded as is stands -- one of the younger wings such as RJ Hunter or James Young is likely not to make the final cut. Would the veteran leadership and sharp-shooting skills that Allen could provide be worth taking minutes away from developing talent? It would be pretty amazing to hear "RAY ALLEN FOR THREE!" echo through the PA system at the TD Garden again.

Either way, if Allen isn't signed to a team by the beginning of the season, it is likely the last we will hear his name linked to rumors of a return to the NBA: "At the start of the year, if nothing pans out, then basically I'll retire," he said.

Would you like to see Ray Allen back in a Celtics uniform? Share your opinions in the comments below.