It's August and nothing is happening, let's analyze Jaylen Brown's Twitter Q & A 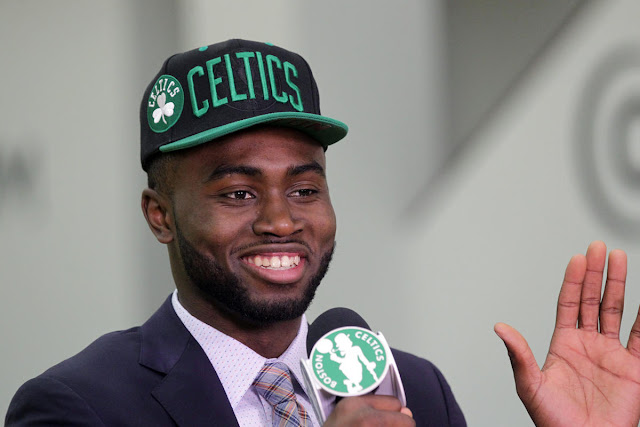 Jaylen Brown was at whatever the Adidas Uprising Championship is on Monday, and apparently was bored enough to do a Twitter Q & A. It was a wide range of questions that I will now arbitrarily review.

First reaction upon being drafted by the greatest franchise in the NBA?


My reaction: let's do it! https://t.co/cvfMWJFYqV

A nice flat one down the middle to start, and he nails it. Kudos to Josh Grasso for having good taste.

I don't live in Boston, so most of my pizza history there is limited to what is across from the Garden and Fenway Park. I seem to remember Bob Ryan creaming his jeans over Santarpio's in his biography. If you're a local, give Jaylen some recommendations. Organic? Not my style, but I'm not a professional athlete and it's POSSIBLE we have different goals regarding physique.

Sounds like Brown is excited for the opportunity to explore the studio space, and use his own speed and athleticism. He definitely showed it in summer league. If space and speed are what he's looking for, I hope someone has already warned him about his morning commute.


What age did you first play and dunk a basketball?

Not a chance in hell he dunked in 3rd grade. Almost positive he didn't read the full question. I'm questioning his drive to break a mental sweat and learn our schemes. Hopefully he reads whiteboard better than twitter.


What do you think is the best part of your game that is underrated?

Smart and political answer, maybe he's sharper than I thought.

Should have been his answer to the last question. Also, would like to see this in a game please.


Who do you watch on tape?

Definitely starting to doubt the sincerity of that whole "passing" thing.


How excited are you to experience the TD Garden excitement?


Super excited. Can't wait. Still haven't been to the Garden yet. https://t.co/E5zXQ5CMDQ

The excitement in that building is definitely special. Surprised he hasn't been to the Garden yet. Can anyone get him Streisand tickets for the 16th? Should be pretty wild.


Favorite artist to listen to?


Lauryn Hill is my favorite artist of all-time. https://t.co/3GA9stxn3m

Definitely surprised by this. I'm 32 and I think the Fugees were big when I was in 6th or 7th grade. Guess she survived the test of time over Wyclef.


Who is your favorite former Celtic?

I'll always have love for Rondo. Almost any answer here is acceptable besides Mark Blount, Ricky Davis, or Keith Bogans.


If you weren't in the NBA, what would you do?


I would probably still be in college, enjoying being a student. https://t.co/sEZrtWQi6z

Good stuff from Jaylen, I think I like him! I'm going to throw him the coveted Thomp follow. Also, as a commenter debate, let us know if you think he really dunked in 3rd grade.