The Celtics aren't done with the roster, focusing on previous targets 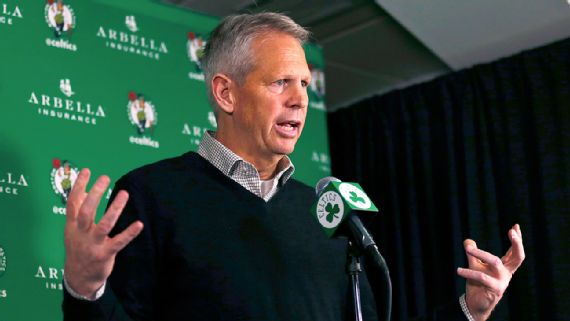 The Boston Celtics have made a splash this summer, but without Kevin Durant the C's are still a piece away from contention. The roster has seen obvious improvement, but Danny Ainge still isn't completely satisfied:


Danny Ainge on if he'd be content to go into next season with current roster: "I think we're not done."
— Chris Forsberg (@ESPNForsberg) July 8, 2016

Ainge feels like there's still something missing, and many fans would agree. The glaring issue is that Boston has few shooters, but Ainge has two positions on his wishlist:


Ainge on what Celtics' remaining needs are: "We need more shooting. … We can use a stronger center, and those are the two biggest things.
— Chris Forsberg (@ESPNForsberg) July 8, 2016


And with the big free agents mostly off the market, the only clear path to improving the roster is through trade. According to Kevin O'Connor of CSNNE, Ainge is lighting up the phone lines. But the important note is he's targeting a guy (or guys) he was looking at on draft night. From Celtics co-owner Wyc Grousbeck on Felger and Mazz, via O'Connor:

We were just talking about a trade earlier today where the asking price from the other team was for a difficult player, and I’m not going to say who, but it’s dropped pretty significantly since draft night.

The Celtics most notably chased Jimmy Butler on draft night, but they also had conversations already this off-season with Philadelphia for Nerlens Noel or Jahlil Okafor, Milwaukee for Khris Middleton, and Sacramento for star DeMarcus Cousins. O'Connor points out that Milwaukee likely is no longer looking to deal Middleton, and the Bulls have no reason to ditch Jimmy Butler anymore, so it's probably Cousins or Okafor/Noel.

Anybody on that list would fill the need for a center, but it's tough to say what the right move would be. Cousins is an elite scorer, and has added range to his game, but has personality issues. He would likely elevate the Celtics to contender status as long as team chemistry stays in good shape. The biggest problem would be the haul it would probably take to pry the former All-Star from Sacramento.

It wouldn't be nearly as expensive to grab one of the two centers from Philly. Both the Kings and the Sixers will demand a point guard from Ainge, and it may be a good time for him to sell high on Terry Rozier after an outstanding performance in the Utah Summer League. Marcus Smart is also a viable trade piece.

Unfortunately, there's no certainty of when any deals will take place, so we could be waiting a while to get some news.