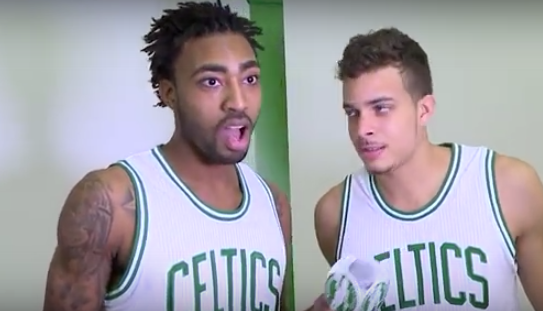 This will all likely change with Danny Ainge's next move, but for the time being there are 11 Celtics players who are locks to be on the 15-man roster in 2016-17:

Jordan Mickey
Demetrius Jackson - Why give him a guaranteed deal now unless you plan to keep him?
Gerald Green  - Unlike Zeller he'll only get paid $1.4 mil, so if he stinks (or somebody else is spectacular) in training camp it wouldn't hurt much to just eat his salary.

That leaves only one more spot available:


I'd argue Abdel Nader has to be on that list as well, considering he was one of the three or four best Celtics in summer league.  Nader, Bentil and Holland don't have serious NBA expectations this season, but it'd come as a bit of a surprise/disappointment to see Hunter or Young fail to make the squad.  The writing is on the wall, however--the Green signing clearly shows a lack of confidence in the ability of either to to fill the role of a wing shooter off the bench.

While an NBA roster can officially have 15 players, on any given night only 13 may be active.  Last year Rozier, Mickey, Hunter and Young all spent time in the D-League.  I'd expect the same to be true this season with Jackson, the 15th man and possibly Mickey too.