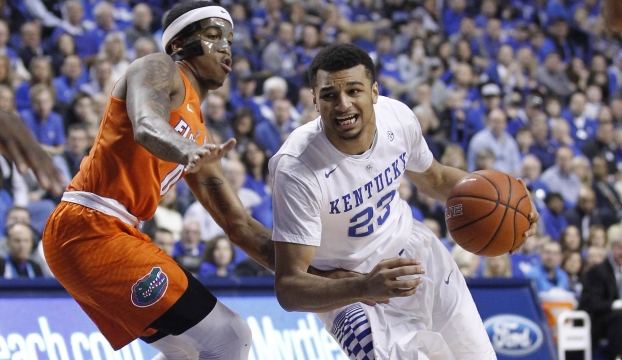 
Murray is certainly in play for the Celtics at number 3. Before the groans about adding another guard start, just remember that Danny Ainge is never afraid to draft the player he believes is the best available and Murray may very well be that guy. At 6'5" with an affinity for putting the ball in the hoop (20.0 ppg. as a freshman), he could be a viable second option right away.  Plus, according to his workout, he could bring some much needed shooting to the backcourt.

ESPN's Chris Forsberg detailed the Murray workout and noted that although the 79/100 shooting clip is impressive, the drill is something Brad Stevens recently brought to the Celtics' workout regime and the previous record was set just this year by Gonzaga's Kyle Wiltjer (77/100). When asked if he was the best player in the draft, Murray confidently answered:


I think so. That's not a knock on anybody. I'm just looking back on the work I've put in, how far I've come, how quickly I learn, how quickly I adapt to my surroundings and how easily I fit into a team. I believe I'm the best player in the draft, but every team needs what they need.

Murray's size and shooting ability suggest he's a shooting guard at the next level, but according to ESPN's Jeff Goodman, he thinks point guard is his natural position. His off-ball play at Kentucky this year was largely due to the outstanding play of Tyler Ullis.


Jamal Murray: "I played the one my whole life. I was at Kentucky for a year. I consider myself a point guard."
— Jeff Goodman (@GoodmanESPN) June 8, 2016


Sabonis and Diallo are both in the right range for the Celtics at 16. Sabonis, who is only working out for Boston, Utah, Toronto and Phoenix, is an interesting prospect. He's a high-energy, mediocre athlete with a glaring lack of a perimeter game. But he makes up for it with excellent rebounding (11.8 as a sophomore), strong basketball I.Q. and court vision for a forward. His hustle and rebounding should allow him to stick in the league as a solid role player.


Diallo is somewhat of an enigma. If you've heard of him, you probably already know that he first picked up a basketball at age 13. You probably also know he only played 7.5 minutes per game and scored 3 points per game for a loaded Kansas squad.This lack of experience obviously lends itself to questions regarding his feel for the game. These questions are valid, especially on the offensive end. His pure athleticism, defense and big play ability however, are undeniable. Shot-blocking and rebounding come easy given his 6'9" frame and 7'5" wingspan. He would certainly be a project, but with 8 picks and 3 in the first round, I expect the image of Diallo in a green jersey has crossed Danny's mind more than a few times.