Is the Kevin Durant to Boston dream dead? 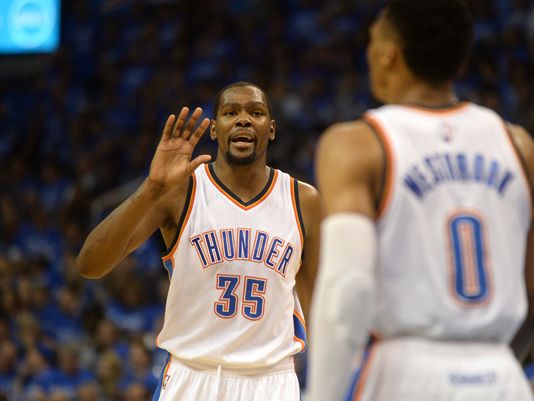 The Oklahoma City Thunder will square off with the Golden State Warriors tonight in the first game of the Western Conference Finals. To get there, the Thunder had to fend off a pesky Dallas Mavericks squad and dispatch the elite San Antonio Spurs. The Spurs, who had a historic season, winning 67 games, were expected for the entire season to match up with the Warriors in the conference finals, but Russell Westbrook, Steven Adams, and most importantly Kevin Durant wouldn't let that happen.

But let's take this back to why it matters to us. As Celtics fans, Kevin Durant is the biggest fish this summer and he allegedly had a "finals-or-bust" mentality with whether he wanted to test free agency. If OKC doesn't make the finals, Durant will hit the road. Well, after KD adamantly denied that statement, we gave it some credence as C's fans (or at least I did...), but now he's a step closer.

And he made that step by taking down one of the best Spurs teams in recent memory. Nobody thought that could happen... even us. In only 6 games. It was tied 2-2 and Westbrook and Durant just said no. If KD wants to win a title is it possible he's already in the right place? And if he is, why bother even thinking about other teams this summer?

To many, there's no reason for him to do so. Rookie NBA coach Billy Donovan has found great success in his first season, Steven Adams has had a crazy good postseason and is showing all kinds of improvement, and the Thunder might have the pieces to contend. So if they can prove that to the former MVP in the next 7 games, why leave?

The Durant to Boston dream isn't dead yet, but it could very well be on life support soon. Everything hinges on what happens next. If the Warriors sweep the Thunder, in compelling victories every night, it's definitely possible Durant looks around this summer. But if OKC can force games six and/or seven, or even win the series, he could have enough to say there's no reason to leave Oklahoma City.

But none of this is for sure. The thing with KD is that he has been incredibly quiet about his offseason plans all year and nobody knows exactly what he'll do. The only thing we know is he wants to contend for a title and if Boston can maneuver a flurry of signings and trades to show KD in their meeting, he might be persuaded. But he has to want to look around first...

Steph Curry and the Warriors will take on Durant and crew tonight at 9... only the next 4+ games will determine what will happen with the Durant to Boston dream now.