Going out on top – leaving in a blaze of glory, clutching championship gold.

Peyton Manning rode off into such a sunset earlier this year. The Red Sox no doubt hope to afford a similarly fond farewell to their Big Papi this fall.

It was 50 years ago today – exactly 16 years and one day after he’d been hired for the job – that another Boston sports franchise sealed the deal on such a send-off for its retiring bench leader … fella by the name of Auerbach. 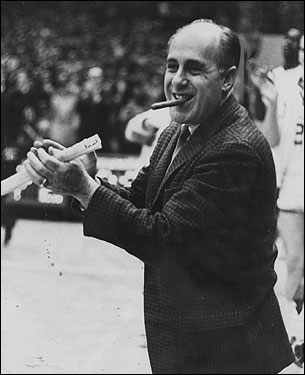 In the summer of 1965, on the heels of his eighth world championship and sole nod as NBA Coach of the Year, Arnold “Red” Auerbach had informed the basketball world that the up-coming season would be his last as the Boston Celtics’ coach. Red’s reputed to have issued the challenge, “You’ve got one more shot at Auerbach!” and specifically called out the Lakers and Sixers.

Neither foe, each of whom would indeed earn that one last playoff opportunity, needed the extra incentive. Only some clutch Havlicek-ian larceny had rescued Game 7 of the ’65 Eastern Division Final and spared the great Bill Russell himself a pair of goat horns for a careless turnover at the most inopportune of times. And Laker Finals frustration at the hands of this particular antagonist (which dates to 1959 in Minneapolis and would endure for another 20 years) had been ensured by Elgin Baylor’s ugly knee injury in the Western Division Final against (really!!) the Baltimore Bullets.

In mid-January of 1965, Wilt Chamberlain had taken his talents back home to Philadelphia, joining forces with a squad which would come to be chosen the best of the NBA’s first quarter-century. Those 76ers responded to Red’s verbal challenge by wresting the regular-season Eastern Division title from his paws for the first time since Russell had arrived, dispatching the defending champs in six of ten match-ups, two on the hallowed Garden parquet.

Runner-up status required an opening-round playoff series – and might have had the cagy Auerbach regretting the omission of Oscar Robertson and his southern Ohio Royalty from his off-season trash talk. For the second time in four years, Cincinnati put the Bostonians in early playoff peril by charging out to a two-games-to-one lead.

Red and his battle-tested troops were prepared for adversity – mentally and tactically.

The strategic adjustment, in hindsight, was a no-brainer. After all, who wouldn’t insert the league’s premier athlete and a budding Hall of Famer (Havlicek) into one’s starting unit in place of a very serviceable “glue guy” (Willie Naulls)?

After three slow starts, the adjusted line-up broke smoothly from the box in Game 4, winning every quarter as they gained control of the series. The close-out on April Fool’s Day was workman-like.

On to Convention Hall and the Zink.


Crisp play allowed the men in Green to “play from in front” and steal Game 1 from a Philly team facing its first competition in 14 days. But aside from eking out a close Game 3 at home and a Hal Greer heave forcing an overtime period three days later on Easter Sunday at the Garden, the 76ers put up little resistance.

In point of fact, they were imploding. Wilt is alleged to have skipped practice the day before the series ender. Auerbach’s successor as Coach of the Year was soon to be out of work, perhaps affixing a stigma to the award that has plagued many a future recipient.

[Historical Footnote: The very next year, curiously, Philadelphia established a new league standard for victories (68), slayed the Boston dragon (in five games, even) and claimed a championship for new coach Alex Hannum, who was hired to do exactly that and nothing less.

The 1966-67 NBA Coach of the year was Johnny “Red” Kerr of the expansion Chicago Bulls, who’d slipped into a newly-expanded playoff field with a 33-48 record.

A five-day respite while LA finished off the Hawks seemed to induce a case of layoff lethargy, as the Celtics let Game 1 at home slip away in overtime.

But Resourceful Red was ready – he had a final card to play.

Like the prior line-up adjustment, the decision itself (again with the added clarity of hindsight) was perfectly logical, even obvious. The cunning was in the timing.

Just as Branch Rickey had done 20 years earlier, Auerbach used the platform of sport as an impetus for social change – while simultaneously gaining a competitive advantage. He chose Monday April 18 – right between Games 1 & 2 of the Final – to reveal the identity of his successor.


Laker coach Fred Schaus was said to have been infuriated that Red had stolen the thunder from his team’s breakthrough win. Score one for our guy, huh?

In response to the news – and perhaps in an attempt to impress the new boss – the boys rattled of three consecutive wins, getting some offensive punch from a couple of unlikely sources. Defensive specialist Satch Sanders shot 10 for 17 in the pivotal Game 3, while Celtic newbie Don Nelson drained six of his eight FG attempts two nights later, both performances on Laker turf.

To their credit, Baylor, West and Co. fought back to force a Thursday evening seventh game at the Garden.

Boston had the ultimate game under control throughout, though a frantic LA closing run – aided and abetted by a surging Garden throng of 13,909 [perhaps fittingly, the C’s would clinch their next five titles on the road] – carved the final margin to a mere two points.

The breakout star of the playoffs, and Sports Illustrated cover boy, was Havlicek.

But the gloriously smoky sunset belonged to his Coach.

“Close But No Cigar!” was never gonna be good enough.