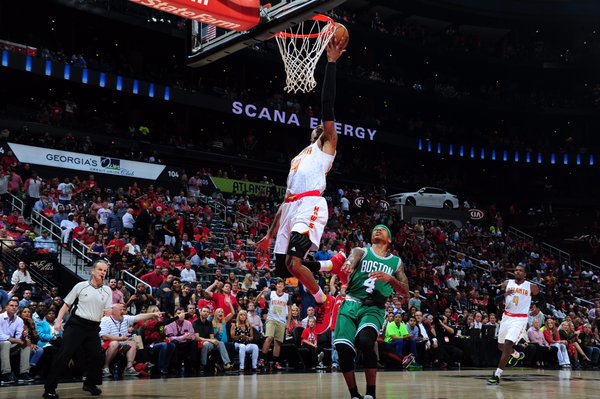 On a night where the Celtics needed a win on the road, they got blown out of the building by Atlanta, 110-83 in a game that was never really close after the 2nd quarter.

The first half was a sloppy affair by both teams as each side struggled to shoot. Boston led at the end of the first quarter and carried a 10-point lead midway through the second. However, Atlanta caught on fire and shot 11-11 for the rest of the quarter. Mike Scott and Kent Bazemore led the way for Atlanta's run by combining for 5 threes in the half. Bazemore had 14 points and Scott had 9 points at the half. For the Celts, Jared Sullinger and Marcus Smart led the team in points with seven each. Isaiah Thomas struggled to get free from the Atlanta defense as they were trapping him in the half court nearly every possession up the floor. The Hawks' run helped them finish the half up 47-39.

Unfortunately for the Cs, they continued to fall apart in the second half of the game. Atlanta outscored Boston 42-23 in the third quarter and began to rain down threes courtesy of Kyle Korver. Atlanta went on another big 17-1 run and ran away with the game in the third. The fourth quarter was much of the same with the Celtics continuing to turn the ball over. The game was out of hand midway through the fourth when Isaiah Thomas seemed to roll his ankle. Thomas immediately came out of the game and went into the locker room. He's been diagnosed with an ankle sprain. As if things couldn't get any better, former Celtic and perennial bench-warmer Kris Humphries even came out to nail some threes on the Celtics' grave for the night.

The Celtics are now down three games to two in the series with Game Six coming up on Thursday night in Boston. Tip-off is set for 8PM. Let's hope our Celts can bounce back after an embarrassing performance tonight. The Boston crowd should be roaring and ready to go, we're not done yet.