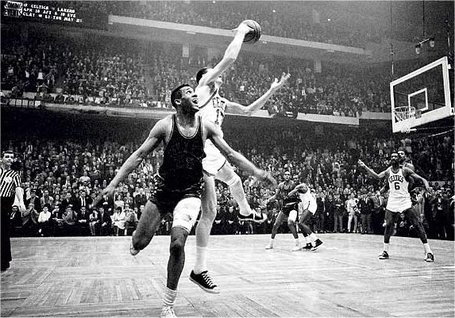 Among the many athletic accomplishments of Boston Celtic Hall of Famer Bill Russell, perhaps the most remarkable is that his team was undefeated when competing in Game 7 of a playoff series, 10-0. The last two of those victories came during the tenure of player-coach Russell – and were two of the four times the achievement came at the expense of his primary nemesis (and good friend), Wilt Chamberlain.

Big Bill’s perfection was placed in the most peril, however, 51 years ago this very night against that very foe – a predicament predicated by his own misplay.

The Philadelphia 76ers, who’d acquired Chamberlain three months earlier, had gone blow-for-blow with Boston through six tough games. Neither team had won back-to-back; neither team had lost at home. 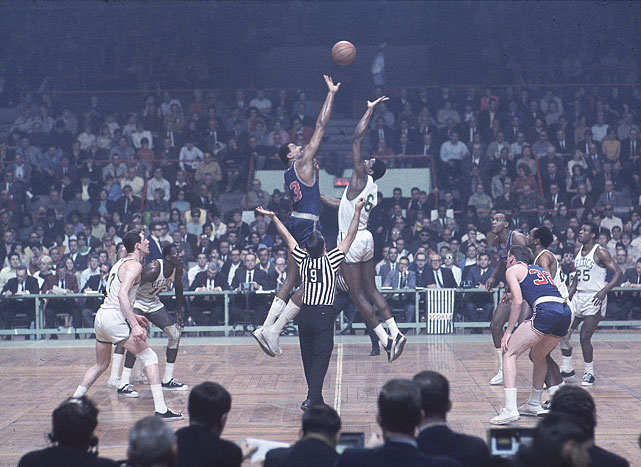 Russell and his mates had participated in two prior Eastern Division Final series which had played out in exactly the same fashion – in 1962 against Wilt’s Philadelphia Warriors and in 1959 against the Syracuse Nationals – winning the ultimate game on the Garden’s parquet each time.

The six-time defending champs showed their mettle this time around, too, having taken a seemingly insurmountable110-105 lead with less than a minute to play.

Basketball 101 preaches two simple rules for salting away victory under such circumstances. Rule #1 is “Don’t Foul!” Rule #2 is “Take Care of the Ball!” (File them both under “Keep Clock Running!”)

Uncharacteristically, Red’s boys botched both, committing a foul and not one but two turnovers, thus providing Philly a full five seconds to get off a series-stealing shot.

Of course, those final five seconds resulted in a cornerstone of Boston Celtic lore and inspired perhaps the most iconic radio call in all sports history, “Havlicek Stole the Ball!”

While spontaneously creating this classic sound byte, the legendary Mr. Most identifies the passer (Hal Greer) and the retriever of this famed deflection (Sam Jones) … also manages to say “Havlicek” an even dozen times. Only one other person, though, merits a mention by name.

On the heels of this “spectacular ending to a spectacular series,” as the hero of the moment is being “mobbed by the fans” and “hoisted aloft,” we are told:

“Bill Russell wants to grab Havlicek; he hugs him; he squeezes John Havlicek. Johnny Havlicek saved this ballgame. Believe that!”


Russ, who’d committed the second (“Russell lost the ball off the [basket] support”) of those near-fatal turnovers, clearly believed.

Here’s my more detailed accounting of this series and season – it’s one portion of a review of this rivalry through the years.