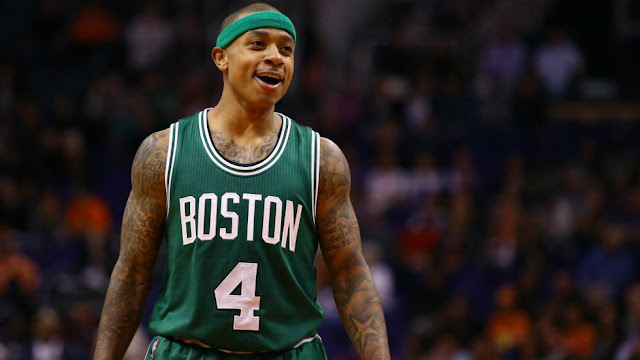 As the May 17th NBA Draft Lottery approaches, the Boston Celtics have a 15.6% chance at landing the number 1 overall pick and a 46.9% chance at being top 3, thanks to the pick they acquired from the Brooklyn Nets in 2013.

This year, Celtics owner Wyc Grousbeck has toyed with the idea of shaking things up. Two weeks ago on Felger and Mazz, he suggested having Boston point guard Isaiah Thomas attend the draft lottery for the C's, and followed up by formally extending an invitation to Thomas during today's exit interview.


Wyc suggested on @FelgerAndMazz that the Celtics might send @Isaiah_Thomas as the team's representative at the draft lottery.
— CelticsLife.com (@CelticsLife) April 13, 2016


Thomas, a superstitious man himself as witnessed by his half-time shoe changes, embraced the idea and immediately accepted Wyc's invitation. He hopes he can turn around Boston's string of bad luck at the draft lottery, and is brainstorming some ideas for good luck charms to accompany him.

"Coming from where I’m from, and the story I have, you’d never think I’d be asked to go represent an NBA franchise at the lottery," said Thomas, the 60th pick in the 2011 draft. "So it’s a blessing for [Grousbeck] to even ask me that. I’m excited to do it and hopefully I can bring some luck."

"I’m gonna do my little research," said Thomas. "Hopefully I can find something that’s good-luck worthy."


What are some of your ideas for possible good luck charms that Thomas could bring with him? One Boston fan thinks he should don a Tom Brady jersey, after Kevin Faulk did so at the 2016 NFL Draft to announce the Patriots' pick:


Share your thoughts and ideas in the comments below.