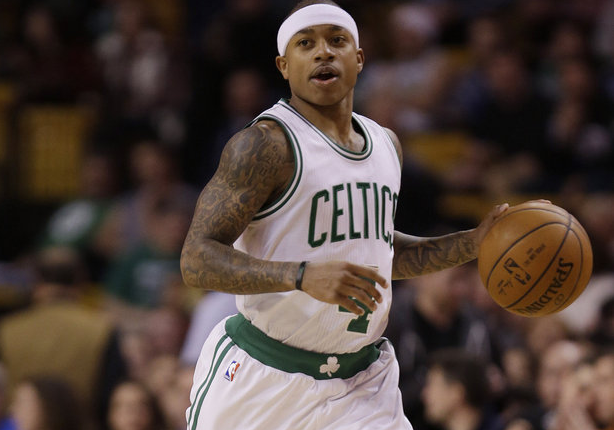 Coming into the season, as a fan, would you have been pleased with 48 wins and a first round playoff exit after six games? I certainly would take the jump in W's from '14-'15 (40 wins), but the end was extremely discouraging, even with all the injuries to use as blame. It's kind of like having the best time at your own wedding, then you get food poisoning day three into the honeymoon.

Looking back there were a ton of memorable moments. Road wins in Cleveland, Oklahoma City, and Golden State stick out the most.

All that being said, here are the reports cards for your 2015-2016 Boston Celtics:

Bradley upped his points total by nearly 1.5 and both his field goal percentage, and three-point percentage slightly improved. His sixth year in Boston was his best, and included the memorable game winner against Cleveland in early February. That shot will be on the teams' highlight reel for years to come.

The 25-year-old should be in consideration for All-NBA Defense, and continues to be the Celtics best on the ball defender. His injury in Game 1 of the playoffs was a big gut punch. Bradley was containing Jeff Teague, and gave the team a three-point threat when Isaiah Thomas drove to the hoop. In his absence, it seemed like every kick in drive to an open three-point shooter ended up in Evan Turner's hands, which resulted in a brick or a drive to the hoop.

When Danny Ainge gets calls for trades this offseason, it's almost a guarantee Bradley will be brought up by the opposing General Manager. His contract is very easy to move, with only two years remaining and $16 million total remaining.

If you were to put a gun to my head, Bradley would be the Celtic I least likely want dealt.

Don't get it twisted. Isaiah Thomas is a star. He deserved to be an All-Star and had a BEAST of a year. How the hell he scores in the paint as small as he is remains a mystery. His 42-point performance in Game 3 will be remembered by most fans, but IT had a ton of great games during the season.

His best game may have been his 36-point outburst against the Clippers in January. That game was the most impressive home win of the season.

It's clear to anyone who watched the playoffs that Thomas can't do it on his own. He was double and triple teamed so much that he had to rely on Turner, Terry Rozier, and Jared Sullinger to hit open jump shots. Not exactly a formula for success.

Thomas' emotion after the game Thursday night was real and goddamnit I loved it. He clearly loves being a Celtic and will sell the city and the organization to anyone who will listen.

The heart and soul of the team, Crowder showed the league that he is morphing into an above average offensive player, while continuing to be a very good defender. He will need to improve his shooting from deep (34%) if his game is going to the next level.

His high ankle sprain at the end of the year hurt the team as they stumbled into the playoffs. It was clear Crowder was not the same in the postseason. He had a tough time driving by defenders, a part of his game that looked so good at times during the cold winter months.

Crowder is another guy that GM's will ask about. If he can get you back Jimmy Butler (a better version of Crowder) please Danny pull the trigger.

Johnson was hyped as the Celtics biggest offseason acquisition and had an up and down year in Boston. Plagued with plantar fasciitiis issues for a few weeks really hurt the big-man's ability to have any type of impact.

Johnson's best game in green came against in a win against the Pacers on January 13th, when the 28-year-old scored 14 points while grabbing 18 rebounds. The Celtics have an interesting decision regarding Johnson's future as the team holds an option on him for $12 million next season. If the C's can attract a rim defender like Hassan Whiteside or DeMarcus Cousins, Johnson stop in Boston will be a short one.

As the season tipped off Sullinger's role with the team was up in the air. With David Lee on the roster, the C's big body was the odd man out in the five person frontcourt. But give Sullinger credit he fought his way back into the starting lineup and produced, nearly averaging a double-double, all while playing in a career-high 81 games. He even took 81 less three-pointers this season than in the '14-'15 in 23 more games.

Unfortunately as the playoffs rolled around, Sullinger's weaknesses were front and center. His inability to knock down open jump shots, as well as his lack of lift in the paint to score over bigger defenders hurt the C's immensely.

The fourth-year Celtic is a restricted free agent this summer and could be shipping out of Boston if another team throws a good chunk of change his way.

Turner had another excellent year, remaining one of the teams' most important bench pieces. His play with the second unit put him in the conversation for NBA's Sixth Man Of The Year. His ability to create his own shot from 15 feet is unique in today's NBA. At times he reminds you of Paul Pierce with his slow motion dribbling skills.

Plugged into the starting lineup for the playoffs, Turner's terrible three-point shooting really hurt the squad with Bradley out. Turner shot a disgusting 24% from beyond the arc for the season. As the Celtics biggest unrestricted free agent. Turner could see a bigger payday coming his way after only making a little over $3 million this year.

He should receive interest from the Knicks and Magic, two teams that badly need veteran leadership.

Smart battled a knee injury early on in the year and the Celtics sophomore was slow to work his way back. He obviously has a God given talent to play great defense, and nobody on the court works harder than Smart. He will need to work on driving to the hoop more if he can't improve his terrible shooting from distance (25%).

Smart has to work on being more of a nightly threat on offense. He has a little bit of Jeff Green in him when it comes to consistency his shooting.

The playoffs may have been Smart's coming out party, his 20 point, 8 rebound, 5 assist Game 4 could be a jump start to an even better third year. It was encouraging to see Smart's willingness to get to the hoop during Game 6 as well as he appeared to be the only guy on the C's not settling for jump shots.

Love him or hate him, when Olynyk is hitting from deep, the Celtics offense is at its peak. His third year in the NBA was very similar to his second, with the exception of an improved mark from three. The question with Olynyk, going forward, is can the lanky shooter get any better? Personally I think he can but it starts on the defensive end. His stroke on his jumper is beautiful, but his defense against the bigger bodies of the NBA is ugly.

His shoulder injury, suffered in January against the Clippers, really limited the Canadian forward. It showed in the playoffs where he was a shell of himself, and was pretty useless with his limited time on the court.

His minutes were cut in half from last season, and his starting job was taken away almost instantly, but you never heard a peep from Zeller. He seemed to know his role on this team, and when given the chance, played quite admirably. Zeller's best game of the campaign came in a victory at Madison Square Garden when he put up 16 points while cleaning the glass for 10 rebounds.

The 26-year-old is an unrestricted free agent and, like Sullinger, could be back at the right price.

Rozier showed flashes in limited playing time this season. Due to all the injuries, Rozier was thrown onto the court in the playoffs and produced nicely for a guy who barely sniffed the hardwood for eight months other than his stints in Maine with the Red Claws. The rookie from Louisville averaged 4.8 PPG, 3.4 RPG and 1.2 APG against Atlanta.

If the C's don't bring back Turner, expect for Rozier to get a lot more time handling the ball with the second unit come November.

Rozier's defense was as advertised. He isn't as grimey as Smart, and as much of an annoyance on that end like Bradley, but his quickness isn't matched by anyone else on the team.

The Swede showed promise this year, shooting at a 40% clip from beyond the arc. He is an underrated rebounder and when asked to start in the playoffs, the man produced. The team holds an option on his contract, so like with any other position, if an upgrade is possible, Jerebko's days could be numbered. He could be a nice piece at the end of a championships teams' bench.

Appearing in less games (36) than Rozier, the 28th overall pick in the 2015 draft didn't really live up to his hype. His quick release looks great when the shot goes in, but shooting 30% from deep will not get it done in the NBA.

For a guy who only played in 21 games, averaging 3.6 minutes per contest, Mickey turned into a fan favorite for his shot blocking. If C's management can't improve their frontcourt this offseason, why waving goodbye to Johnson and Sullinger, Mickey could see some serious minutes next season.

It's depressing watching Young. He is exactly what the C's need. A knockdown shooter with the ability to score in bunches, That part of his game has gone missing in his short time in the league. You can only use his age, 20, as an excuse for so long.

A sign that Young isn't ready. The playing time Hunter got over him in the playoffs, when shooting was scarce. If Young can't improve in his third year, the word bust will be floated around and Ainge will certainly take some heat from the locals.

End of the year grade for the coach:

Finishing sixth in the Coach of the Year voting, Stevens continued to improve in his third year at the helm. His out of timeout plays are excellent and make him one of the smartest minds in the game. The most impressive play run all year could be the game winner he drew up in Washington on January 17th. Stevens grasp on his locker room is second to none, all his players seem to really listen to the message he is preaching.

You can only dream to think what he could do with one or two superstars to go along with Thomas. The summertime is where Ainge can make those dream a reality, starting with the draft and free agency.


Rob Welch4/30/2016 06:50:00 PM
Share
Rob Welch
I have been a die hard Celtics fan since birth, even though I don't really want to talk about the ML Carr/Rick Pitino Eras but I will if necessary.
Newer
Older