Can the Celtics hold off Miami and hang onto the 3 seed? 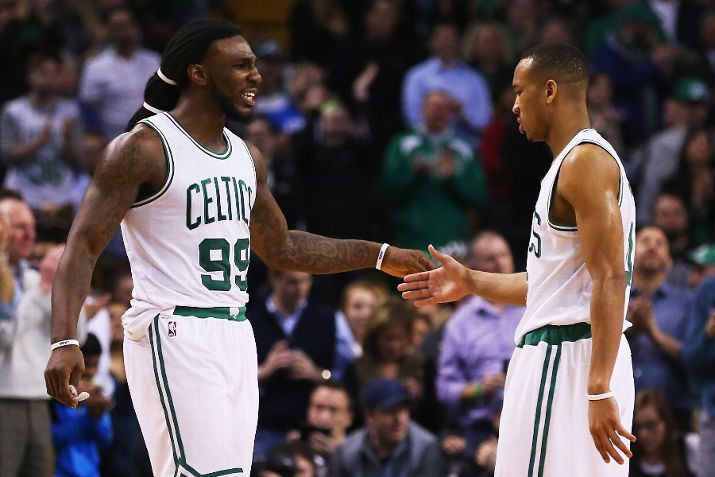 Getting the three seed in the East is important. It means you avoid playing Lebron James and the Cavs until the Eastern Conference Finals. Right now the Celtics sit in third place, but only hold a half game lead over the surging Miami Heat (winners of 5 in a row). So can the Celts finish the season in the coveted three hole?

The Celtics have feasted at home recently, winners of their last 13 contests at the TD Garden. From here on out the Celtics have just as many games at home (9), as on the road (also 9). In the East, it seems like only Atlanta has a tougher schedule ahead, with the Celtics remaining opponents boasting a collective .520 winning percentage.

But a closer look on nba.com shows a more optimistic view of the Celtics' schedule. When taking into account home/away games and back-to-backs, the rest of the Celt's season starts to look softer. Their .488 strength of schedule percentage ranks as the 8th hardest slate in the East, solidly in the middle of the pack. Here's a screenshot of what's left for the C's from Celtics.com: 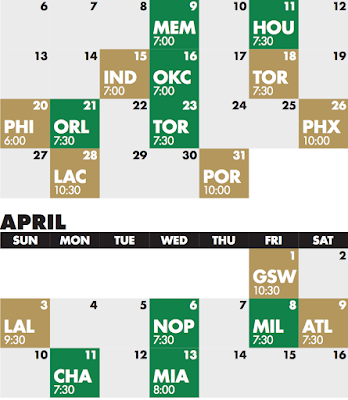 So let's break this down between likely wins, toss-ups, and likely losses.

Thoughts: Houston, New Orleans, and Milwaukee are all dangerous, but with their current home winning streak the Celtics should be expected to beat teams with losing records in their own building.  And with three games left against the three worst teams, the C's need to take care of business. It's not the time to worry about #Netspick, it's time to crush the teams that deserve to be crushed.

Thoughts: The Celtics have earned the right to call all remaining home games at least a toss-up. And with the recent struggles of the Thunder, it would not surprise me at all if the Celts were to take one from Durant and Company at the Garden. They won in OKC earlier this year (no Durant, but still), and Brad Stevens teams love back to backs. While always tough to win one at the Rose Garden (now called the Moda Center?), the C's just pulled off a very convincing win against the Blazers. Tough to put that one in the loss column.

Thoughts: Beating any of these teams on the road would be a pretty significant upset, though certainly anything is possible with Brad Stevens' bunch.

Say the Celtics sweep their seven likely wins, split their eight toss-ups, and lose all three of their likely losses. That seems reasonable. Finishing the season with the resulting 11-7 record would put the C's at a very respectable 49-33 for the season. But is it good enough to hold off the Miami Heat and hang onto third place in the East?

Looking only at opponent winning percentage, Miami (.490) has an easier schedule than the Celtics (.520). But using the strength of schedule percentage, Miami's remaining schedule (.520) is deemed more difficult than Boston's (.488). The most likely culprit for this discrepancy is that Miami has 11 road games left and only 8 at home. It's also about the workload: the Celtics have one less game to play and have three sets of back-to-backs; the Heat have five sets of back-to-backs remaining.

A quick run-through of their schedule using the same likely wins, toss-ups, and likely losses formula:

So using that same thought process of giving the Heat their likely wins, splitting the toss-ups, and counting all the likely losses as defeats... the Heat should finish the season 12-7. Which of course would pull them to a tidy 49-33. The exact same record I just predicted from the Celtics. So...

WHAT HAPPENS IF THE CELTICS AND HEAT TIE?

The Celtics own the tiebreaker against Miami. So if the teams do finish with identical records, the Celtics, who have already beaten the Heat twice this year, earn the three seed and the right to avoid the Cavs until the Eastern Conference Finals. Even if the Heat take over third place and take a one game lead into the very last game of the season, the Celts will still control their own destiny. The Green host Dwayne Wade's boys on April 13th to close out the season.

So can the Celtics hold Miami off? Sure. But it's going to come down to the wire. The playoffs could very well start one game early in Boston this year.