How far can the Celtics go? What do the numbers say? 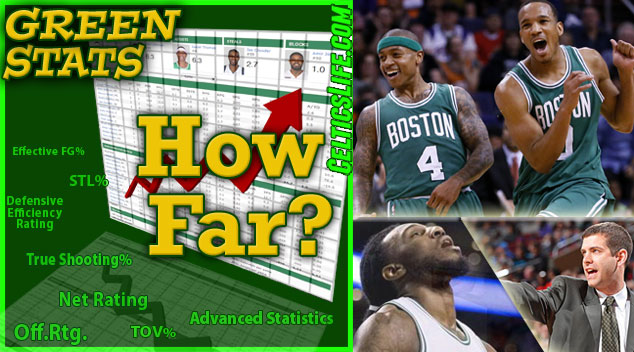 Fans always want to know if their teams can make the playoffs and what kinds of noise they can make if/when they get there. Celtics fans are especially interested these days, because the Cs this season aren't guaranteed of getting anywhere in the postseason — and yet seem capable of almost anything.

What do we know about the Celts going into 2016? And what can we deduce from the evidence at hand?


WHERE ARE THE CELTICS RIGHT NOW?

32 games into the season, Boston is rated as having the:
These rankings come from the team's "Efficiency Ratings" — which measure how many points the team scored per possession (or more commonly, per 100 possessions) and how many points opponents were allowed to score. The Net Rating is the best overall performance gauge we have. It's the difference between the Offensive Rating and the Defensive Rating — a measure of how many more points the team has scored, on average, than its opponents (per 100 possessions).

Bottom line for right now: The Celtics are performing well enough to get into the playoffs — and then exit about 4-5 games later. They wouldn't necessarily be an "easy" out, but their offense, at its current level, just isn't good enough to hang with a really talented ballclub.

Okay, since the offense is the main problem — what's wrong with it? Can/will it be fixed?

We know that the Cs just aren't scoring enough points. Why is that?

Turns out: — it's not because they don't get good looks. The Celtics have no problem getting open shots. The problem they have is making them.

According to NBA.com's SportsVU player tracking stats as of 1/1/16, the Celtics are:


What does all this boil down to?


WHERE ARE THE CELTICS GOING? WILL THEY GET BETTER?

Alright, so we know the crux of the problem: Players aren't hitting their shots.

But we're only 32 games in. The future will not equal the present. Is it possible for this team, as currently constituted, to improve?

For questions about the future, we need to look at patterns that can be extrapolated out. We'll use the Opponent-Adjusted Ratings ("OARs") for this purpose, because:

So here's the question we want to answer: Are the Celtics getting better? Or are they standing still, or even possibly getting worse? We ask because we know that they MUST GET BETTER in order to rock the playoffs.

We start with the Cs' per-game Net OARs — which measure the club's overall performance relative to league averages — and we look to see if they're improving over time. Here is that graph for all games through December 29:

The trend line (green) has a small positive slope (upward trend) — indicating that the team IMPROVED its overall performance in this span. This is an important piece of information, because if the team is actually getting better, anything can happen by April/May.

But there's a rub here: This team's defense is doing just fine. It's number 2 in the league — behind only the preternatural Spurs. So WE DON'T CARE if the defense is improving or not (so long as it's not declining much, of course). It's more than good enough the way it is. What the Cs need is better offense.

If the defense stays solid (as expected) and the offense improves enough, then by playoff time the Celtics could have both offense and defense in the league's top-10 — the minimum requirement for any real contender. On the other hand, if the offense does not sufficiently improve — well, then it's hopeless.

So the key question right now is: Is the offense improving? Can it get into the league's top-10 before playoff time?

Here are the Offensive Opponent Adjusted Ratings (Off.OARs) for the season to date:

These Offensive OARs measure how well the team scored in each game, weighted to account for the strength of each defense it faced. As you can see, the trend line (green) is clearly going up. That positive slope is extremely important for this team, because it means that the offense is improving over time — which means it's possible for it to reach (and maintain) top-10 status at some point this season. (If the slope were negative, and stayed that way — only a trade could change the Celtics' sorry fate.)

When we look at a smaller sample of more-recent games (last 10), we see an even more marked positive slope in the Offensive OARs' trend line: 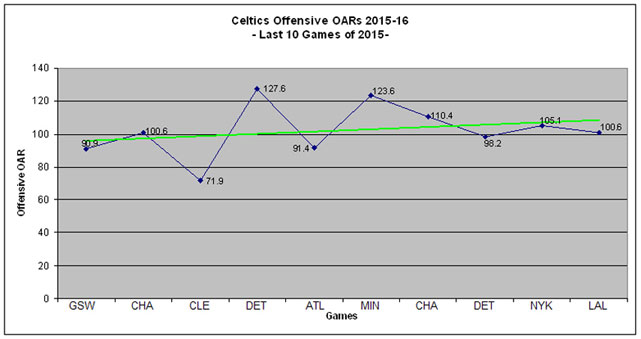 Tech Note: Even if we eliminate the very-low rating for the CLE game (71.9), the slope of this trend line remains positive.


BUT HOW CAN THE CELTICS IMPROVE, WITHOUT TRADING?

Since the numbers show the Cs' offense is improving, and since those numbers are (obviously) based on the team as currently constructed — logic dictates that this team has the ability to improve without any trades. I.e., organically. So how?

We've seen that shooting is the biggest issue right now. OK — so will the shooting improve? Can it?

The following 7 players are currently hitting their shots at rates worse than their lifetime averages and can therefore be expected to improve naturally — at least revert to their norms — at some point. Keep in mind that players under the age of ~32 tend to get better with years in the league. Reversion to their means is the least we can reasonably expect from them.
Note: eFG% measures shooting accuracy, giving extra credit for 3-pt shots. TS% adds credit for made free throws.

Why so many guys off their lifetime marks? One theory is that they're not getting enough playing time ("PT").

That theory can't hold for Thomas, Smart, Sullinger and Johnson because all four are getting either more minutes now than their lifetime averages, or about the same.

Turner is getting ~2.1 minutes less now (26.4 min/game) than his lifetime average (28.5 min/game). Hardly enough to make a difference. Also, ET is actually making his upward move right now. His averages were significantly lower a short time ago. (Turner might actually overshoot his lifetime averages, as his current move up seems very strong.)

But some of the biggest shooting-accuracy dropoffs we're seeing this season — compared to lifetime averages — are happening to two players whose PTs have been cut the most:
Presumably, neither Lee's nor Jerebko's PTs are going up anytime soon. But they could still revert to their individual means (or better) as the season goes on and they get more acclimated to their current situations (and/or get over whatever slumps they might be in).

If/when these reversions/improvements happen, the team's overall Offensive Rating should see a significant improvement. The estimate of the impact on team eFG% is right around +2.3% — which could bring the overall Offensive Rating to ~#8-#10 in the league: contender territory. Note: That would be the reasonable upper limit of how far the current iteration of this team's offense can go.

Remember: All this is without any trades.

The bad news is the Dec. 30 Lakers game. When we add that to the Net OARs graph, things change — pretty dramatically:

That one very bad game — and it was extremely bad in terms of the OARs, because the Cs performed SO much worse than they should have, based on LA's abysmal record — redirects the Net OARs' trend line for the entire season-to-date downward. (It even looks like a heavy anchor off the side of a ship, in the graph.) Not good (obviously).

But there are some valid counters here:
But.... yeah. That happened. Can't ignore it. Curb your enthusiasm accordingly.

The Celtics' defense is more than good enough to go as far as any fan can dream in the playoffs. (Yes, even to the Finals.) Their offense, though, is currently not up to the task. But it is improving over time, so it remains entirely possible — for all the reasons enumerated here — for this team to become a true contender by April/May — even as currently constituted.

Everything depends on how much the offense can improve. (Well... not everything. When the chips are down, the defense can't just drop dead like it did for LA.)

Of course, in addition to the potential of the team "as currently constructed," Boston also has Mr. Fixit working in the background, looking to change the current construction. What that will do, what triumphs and tumults that may bring — no one knows.

Not even Danny Ainge himself, I suspect.