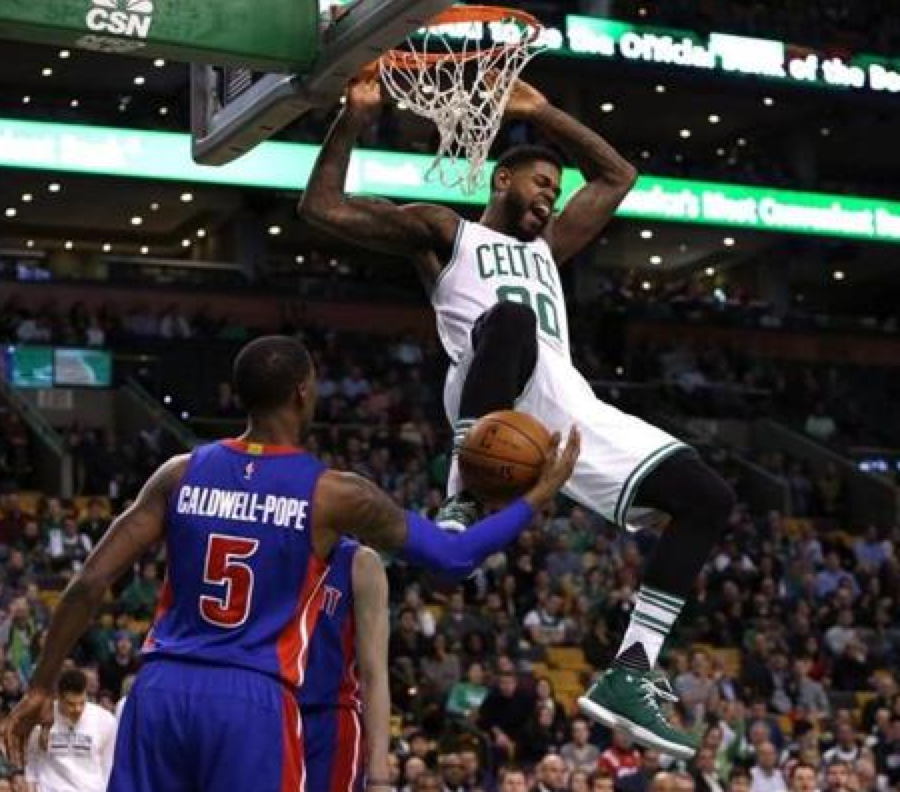 BOSTON — Tonight the Celtics faced the Pistons in the third of their four regular season match-ups and on the first night of a back-to-back this week. In their last meeting, the Celtics took the win in Detroit the day after Christmas.

Tip-off at the Garden featured the same line-up as Monday night. Unfortunately for the Celtics, the outcome was not the same. Despite trailing most of the game, the Pistons’ bench proved more productive and Detroit took home a win.

1st Half
1st points of the game came courtesy of a Jae Crowder mid-range jumper and the Celtics starting unit came out of the gate strong going 10-14. Evan Turner took advantage of his match-up with Jackson going 4/5 before Smart checked in for him at the 4-minute mark and the Celtics were shooting 71%. Olynyk finished the quarter with double digits and a pair of three’s.  RJ Hunter saw some time in the 1st quarter and racked up a deft steal. Celts closed the 1st quarter shooting 61%. They impressively out-rebounded as well as outscored Detroit in the paint (16 to 6).

RJ Hunter started the 2nd quarter alongside Smart, Sullinger, Jerebko and Turner. Celtics suffered a lull in their offense scoring only 7 points by the midway point of the quarter. Caldwell-Pope – on the other hand – contributed 9 points for Detroit in a little over a minute of playing time via 3 three-pointers. A baseline three from Turner ignited the Celtics to give them a 4-point lead only to be answered by another Caldwell-Pope bucket. Although they shot less efficiently in this quarter (46%), Boston ended the half with an 8-2 run and headed into halftime with a 7-point advantage.

Evan Turner was high scorer for the Celtics with 13 pts and 4 boards at the half followed closely by Crowder who shot perfect from the floor, going 4/4. In total, four Celtics players (4/5 starters) ended the half in double digits (Johnson 10, Olynyk 10).

Caldwell-Pope finished the half as high-scorer for the night thus far with 15. Reggie Jackson was a close 2nd with 13pts for the Pistons. Drummond finished the half with 3 fouls (in 11 minutes of play time) and Sullinger was in a similar boat with 3 fouls of his own. Detroit committed 10 turnovers in the half.

2nd Half
Celtics’ starting five began the half and went right at Drummond to kick-off the quarter with the 1st points of the half from Amir Johnson, pushing him to 12 points and 9 rebounds. Drummond got to the line and managed to aggressively air mail a foul shot in a live promo for Hack-A-Drummond. The Celtics led by 7 and 8+ minutes to play. Olynyk would pick up his 3rd foul shortly after, amidst a flurry of foul calls made in a very short window in the 3rd.

Olynyk chalked up his 4th foul soon after and Jerebko would replace him in the line-up. With 5 minutes to play in the quarter, Celtics had their biggest lead of the game – ahead by 13. Under 4 minutes to play, Johnson was 3-3 and everyone else was 0-12. Drummond who is typically trouble on the boards had only 3 rebounds thus far. Jerebko would be the first Celtic other than Johnson to score in the 3rd quarter. James Young jumped in for Thomas with a minute left in the quarter. Boston finished the quarter with a 9-point lead. Turner and Johnson were a combined 33 points and 17 rebounds but as a team, the Celtics shot just 23%.

C’s started the 4th with Smart, Jerebko, Sullinger, Young and Crowder on the floor. Detroit scored first – twice before the Celts could – but Sullinger would hit a jumper to put Boston back up by 6 pts.  A short Marcus Smart three left him at just 1-8 so far. A Drummond basket would be followed by a Celtics’ timeout and a Celtics' lead cut to 2 points.

Detroit tied the game at 79 but Isaiah Thomas notched a very timely 2nd basket of the night to give the Celtics back the lead. With a little over 6 minutes remaining, some loose-ball Crowder hustle stopped Detroit from grabbing their first lead of the game. Unfortunately, a trip to the line – that did deliver Detroit their first lead – plus a Tolliver three put the them up by four with 5 minutes to play. Five consecutive points from Thomas – including a pull-up three – would cut a 6-point Pistons lead to 1. He’d also give the Celtics back the lead but a crowd-silencing three from Detroit and an offensive foul called on Crowder sent the lead and the ball back to the Pistons.

Worth noting that the Pistons had 10 more attempts at the free throw line than the C’s before the 2-minute mark. Trailing by two – with a fresh 24-second clock – the Celtics got the ball after an official review under the basket. An Isaiah made foul shot would cut the lead to 1-point but Detroit’s Stanley Johnson hitting a 3-pointer inflated their lead to 4-points with under a minute to play. Thomas and Smart both drew fouls in the final minute and the Celtics were only back by two. A hook foul called against Marcus would put Baynes on the line for Detroit and bump their lead back up to 4 points. A missed attempt on a three by Kelly Olynyk would be the C’s last possession for the game.

Both Isaiah Thomas and Amir Johnson had double doubles on the night.


Celtics meet the Bulls (21-12) tomorrow night in Chicago for a nationally televised game on TNT.