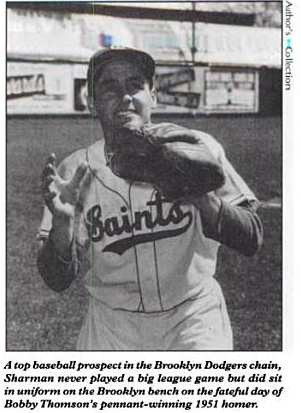 On the 21st of August, we remember #21, the legendary Bill Sharman.  He was the starting guard alongside Cousy on some of the earliest Celtics' title teams and is well known for being one of the most proficient free throw shooters during the first part of the NBA's existence.

What you may have forgotten is what an athlete Bill was.  Did you know Bill was in uniform on the Brooklyn Dodgers' bench on the day of Bobby Thomson's famous 1951 home run?

Each day in August, Celticslife will post a Celtics-related picture, one you may possibly have never even seen before.