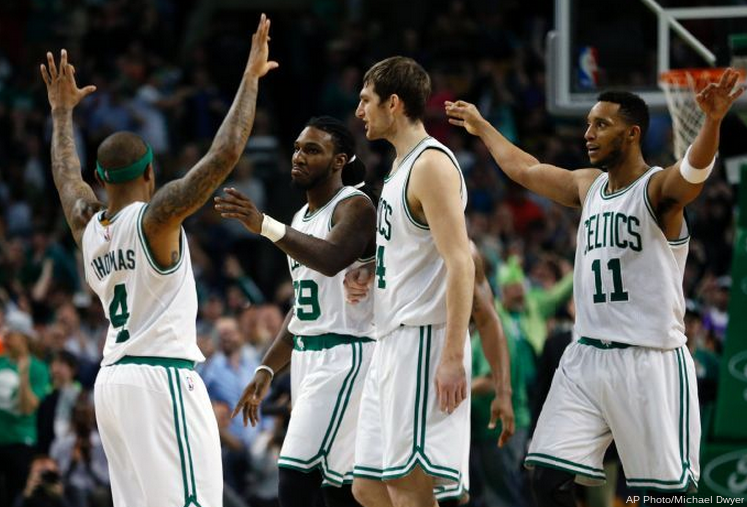 With their dramatic win over the Raptors last night, the Celtics locked up the No. 7 seed in the Eastern Conference and a postseason date with LeBron James and the Cavaliers.  Boston could easily have mailed it in against Toronto, let the game slip away and taken its chances on maybe falling to No. 8 and a Round 1 matchup with Atlanta.

But, that's not how these Boston Celtics do things.

After trouncing the Cavs on Sunday, when the topic of of potentially resting his players came up, Brad Stevens said "we're going to try to keep gaining steam."  Yesterday Stevens elaborated on that with (via ESPN Boston's Chris Forsberg):


Stevens on preparing for playoffs: "Hopefully we can finish out the regular season playing good basketball and take it into the weekend."
— Boston Celtics (@celtics) April 14, 2015


"Gaining steam" and "good basketball" are terms that certainly apply to the Celtics these days.  They've won their last five games, and seven of their past eight.  Over its last 35 contests (which is no small sample size), Boston boasts a record on par with the best clubs in the league:


The Celtics are also 18-6 vs. East teams in that time, the best record within the conference (Cleveland is second at 15-8).

The victory vs. Toronto gave Boston a 12-4 final record in Atlantic Division play, one game better than the division winning Raptors (11-5) and tied for the second-best division record in the entire NBA (behind Golden State's 13-3).  The 39-42 Celtics also now own a positive scoring differential of 0.1 points per game on the season, an incredible feat for a squad that was once 16-30.

Maybe the coolest thing about these Cs: the juxtaposition between their real confidence and their admission they don't have a lot of talent.
— Jay King (@ByJayKing) April 15, 2015


Tonight Boston finishes the regular season in Milwaukee, with a chance to get its 40th win of the year.  Stevens said he intends to "go deep into his bench" this evening, but don't be surprised if his guys battle till the end and come away with another W.  After all, they have won six straight games on the road and their last seven on the second night of back-to-backs (as well as 10 of 11).  Gotta keep the momentum going...