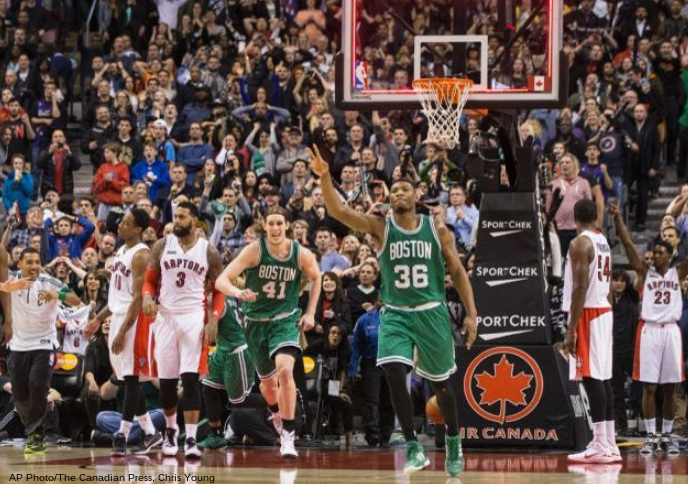 With four seconds left in the game last night, Lou Williams hit a three-pointer to put Toronto up by one.  Brad Stevens immediately called timeout to organize a play.  On the ensuing possession, the ball was inbounded to Jared Sullinger at the top of the key.  Sullinger took a dribble and began driving towards the basket.  Not liking what he saw, Stevens called another timeout--with just 2.6 seconds remaining (Sullinger missed a runner in the lane after the whistle).

Here's the play Stevens set up the second time around (notice where Isaiah Thomas starts from):

I can't think of another example where a coach calls a second timeout mid-play like that. Brilliant. Celtics have a keeper in Stevens.
— Chris Mannix (@ChrisMannixSI) April 5, 2015

Feel like lots of coaches would have been caught watching/cringing. And on last play, love getting it to IT with full steam ahead already.
— James Toscano (@Jimmy_Toscano) April 5, 2015

That was a pretty cool play to get Thomas the ball on the run. Raps were on their heels.
— John Schuhmann (@johnschuhmann) April 5, 2015

And in case you haven't seen this tweet yet, it's starting to look more and more like the truth:

Brad Stevens is the best in game coach in the NBA. Pop has a better system / culture gets the rest stuff etc. But Stevens is best in game
— Haralabos Voulgaris (@haralabob) March 31, 2015