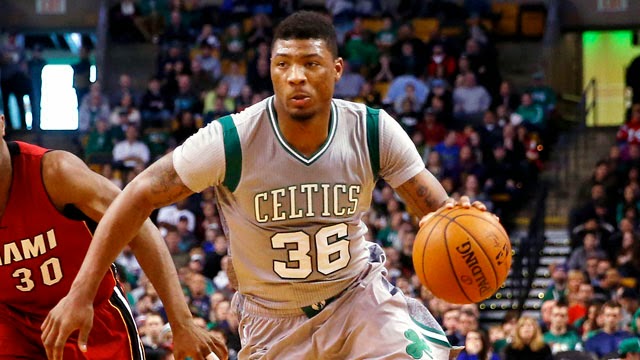 The NBA may be on hiatus for the next 10 days (save for this weekend's All-Star festivities), but the league's website has given fans a new toy to play with in the downtime.

On Thursday NBA.com began allowing users to sort stats based on play types, such as spot-up shooting, post-ups, and isolation and transition plays. Jay King of Mass Live found some interesting numbers for the Celtics, including this nugget on Marcus Smart's 3-point shooting:

As @JanRunescape points out, minimum of 50 spot-up possessions, Marcus Smart (who couldn't shoot) is 2nd in the NBA to Kyle Korver in eFG%.

A few more tidbits pulled from the new information:

1. Jared Sullinger leads Boston with 144 post-ups this season, good for 32nd-most in league and behind players such as Minnesota's Andrew Wiggins, Washington's Kevin Seraphin and L.A.'s Kobe Bryant. Sullinger has shot 42.5 percent on post-up attempts and scores on 45.1 percent of his post-ups. Tyler Zeller is second on the team with 71 post-up opportunities.

2. Sullinger also leads the Celtics with 123 points off of put-backs. He's shooting 57-for-94 in such situations this year.

3. The Celtics have been great at moving without the ball this season and rank sixth in the NBA with 1.28 points per possession on cuts. Boston is shooting 66 percent on possessions that end with a cut. Zeller leads the team with 145 points off such plays.

5. Bradley leads the Celtics with 0.78 points per possession as the lead ball handler, on par with Utah's Gordon Hayward, San Antonio's Tony Parker and Sacramento's Rudy Gay, albeit on much fewer opportunities.