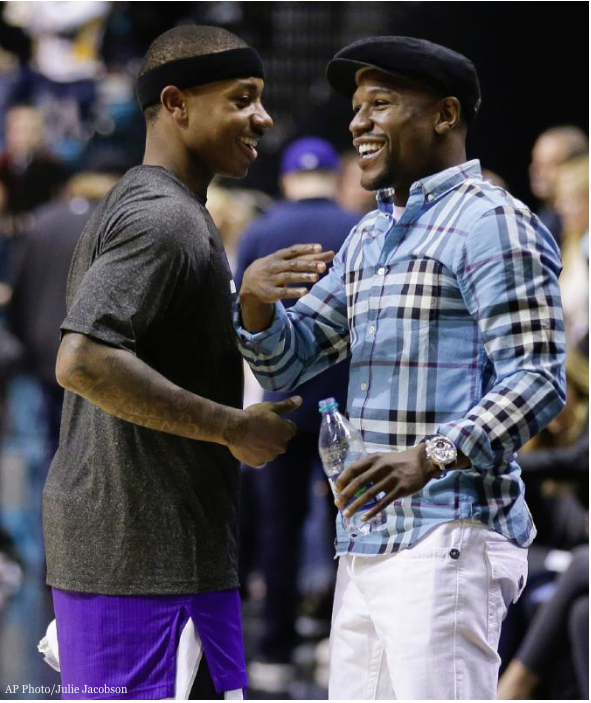 Its safe to say there is no shortage of excitement for what Isaiah Thomas brings to the Boston parquet. What you may not know is who Isaiah brings to Celtics courtside...Floyd Mayweather.

Isaiah Thomas’ luminary friend Floyd recently surprised him with a Bentley for his 26th birthday.

Via Paul Coro at azcentral, Isaiah said the following about his more-than-luxurious gift earlier this month:

It was a surprise. I'm still surprised. That's a great friend. It was one of his. He just didn't ride it that much because he's got so many.


Most Floyd fanatics would be pretty excited just to get the aforementioned “birthday tweet” from the world champion boxer or a re-tweet. Heck – seeing a Floyd Mayweather favorite in Twitter notifications would probably make many people’s day/week/month.

There’s more to be envious of when it comes to their relationship – you know, beyond social media shout-outs and gifts of $200K cars. The two have trained together in the offseason and have supported one another’s careers. During Thomas’ time with the Sacaramento Kings, he shared some details of their friendship.

Reported by Alex Kramers for the Kings Blog at NBA.com, Isaiah commented:

He calls me before every game and says, ‘It’s time to focus. It doesn’t matter if you’re going against Chris Paul, Derrick Rose – they put on their jerseys just like you. You just have to outwork them.' We’re both small guys – both guys who they said could never do what’s been done. He’s undefeated, so he’s really done what hasn’t been done, but at the same time, in my profession, you don’t see small guys who make it in the NBA – or any professional sports, at that. So, I’m trying to shock the world with that, just like he’s trying to shock the world with having an undefeated career.


In addition to the motivation they share as “small guys” successfully overcoming stereotypical odds, Isaiah points out that Floyd’s presence at his games is perhaps more than a coincidence when it comes to the win column.

Every time he comes it seems like we play good as a team and we get a win, so I'm trying to get him to a few more games.

Sounds like a plan! Let’s get the man some courtside seats at TD Garden.