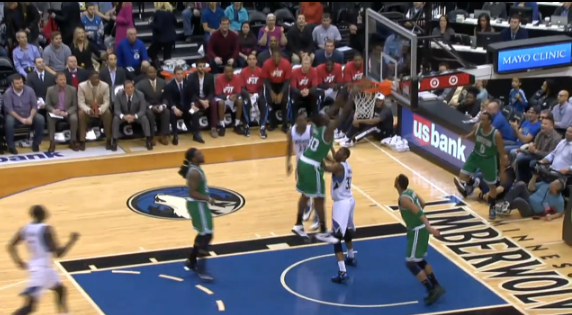 Well, this was supposed to be an easier game if the Celtics' impressive record on this road trip were to indicate anything, but of course the Celtics love to surprise us at every game this season in order to keep the entertainment value up, so instead we had a loss at hand. It should be noted that Nikola Pekovic and Kevin Martin returned from their injuries recently and Andrew Wiggins has been looking like the prospect he was hyped to become so the Timberwolves are a better team than what their record shows, yet the Celtics' much appreciated defensive tenacity was nowhere to be found tonight. I guess the team is tired and they want to come back to Boston now that the blizzard is over.

The positives? Marcus Smart shot 4-5 from downtown, had 12 points and 6 assists. Evan Turner had another one of his "all-across-the-board" performances with 10 points, 4 rebounds and 6 assists, and he only had 1 turnover! Jared Sullinger had 16 points and 8 rebounds, not his best showing but still an OK one. Brandon Bass had 10 points and 6 assists in 22 minutes. (Any contenders out there?) Avery Bradley shot poorly (5-15), but still scored 13 points and had 3 steals. Tayshaun Prince also continues to be an important player off the bench with 12 points in 23 minutes. And that's about it.

The main difference tonight? The Celtics had 9 free throw attempts, but the Timberwolves went to the line 32 times. It is almost impossible to win a game with such a huge FT differential.

Well, overall the Celtics ended this road trip with a 3-3 record. They were expected to win 1, maybe 2 games. I guess I can't complain.