Are you concerned about Marcus Smart's flopping? 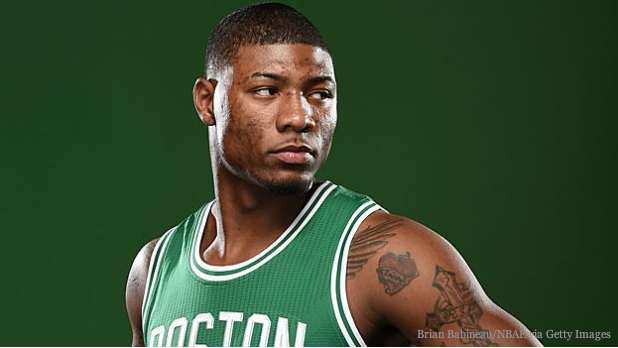 As the Celtics continue to shake-out players acquired through moves made thus far this season, attention should now start to fall onto guys striving to be this team’s core unit. (Or, there could be 3 more trades before deadline, “anything’s possible.”) As one of these players, Marcus Smart has been touted as a potential leader since the get-go.


From Rachel G. Bowers at the Boston Globe:


“Marcus is a very intriguing young man, a tough kid, gone through a lot. I think he has the potential to be a fantastic leader and player.”


Ainge on Smart: "We couldn't find one person who wasn't high on Marcus as a player and a leader."
— Ben Rohrbach (@brohrbach) October 2, 2014

Marcus Smart was yelling at Celtics on D from sideline. That's what you want to see from a rookie who needs to become a vocal leader in NBA.
— Jessica Camerato (@JCameratoNBA) December 26, 2014


With Smart being expected to lead and showing early signs of this potential, should there be concern for him producing what many deem "flops?” This gif of him from the game against Dallas on November 3rd has definitely made the rounds.

From a fan's perspective, flopping is somewhat of a conundrum. You dislike it when an opponent gets away with it but you just might embrace it and deny it happened, when your team gets the resulting call. Marcus hasn’t exactly denied his use of the technique and adamantly defends it.

From an interview with Seth Davis at si.com:

Reminded that the NBA issues fines for flopping, Smart shook his head. "They won't fine me because it's going to be legit," he said. "I don't understand what people call flopping. Isn't drawing a foul what you're supposed to do? When you're driving, you throw your body. You draw a foul. If that's a flop, then everybody flops because everybody's trying to draw a foul."


To Smart’s point, is there a player in the league who hasn’t flopped? Maybe there is. More than likely though, most guys have done it. So, at what point does the behavior become a reputation and define you as a player?


As reported by Jeff Goodman at espn.com:

"I've probably built up a little reputation, and I'm not questioning that," Smart said after the Cowboys' latest loss -- at home in triple overtime Monday to Iowa State -- the team's fourth defeat in its past five contests. "But I'm not the only one flopping. Every team and every player does it to make sure you get the call."


Iowa State fans didn't question it either and had some fun with Marcus Smart at a match-up against Oklahoma State.


In my opinion, Smart's position on this isn't a cause for concern. He brings so much more to the game and his team – hustle, talent, passion – that's worth focusing on. Let's not forget, during the aforementioned game against the Mavericks, Marcus also did this:


Steph sidebar: Flop is one of these words that if you keep repeating…it really starts to sound ridiculous. Flop, flopped, flopping – I officially start a petition for a “flop” synonym. Challenge issued. Ready, set...go.