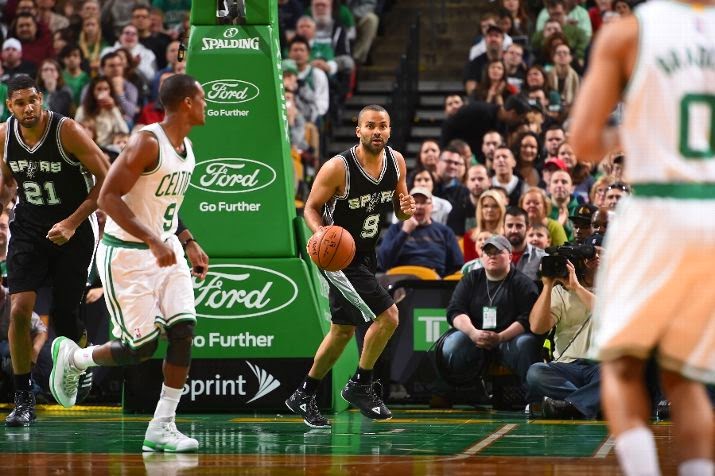 The Celtics were no match for the World Champs this afternoon at the Garden, as the Spurs smacked the Cs around in the second half, winning 111-89. San Antonio was led by Danny Green (18 points), and Boris Diaw (15 points, 7 boards), but mostly leaned on their overall balanced scoring approach (6 guys in double figures). The Celtics were led by Jeff Green (16 points), and had four other guys in double digits.

Stop me if you heard this one before: The Celtics played well in the first half, building a lead as big as nine points in the second quarter. The Cs came out with a new starting center in Tyler Zeller -- who replaced Kelly Olynyk -- but the first unit was sluggish out of the gate. However, the bench played extremely well in the first half, led by Evan Turner and Marcus Thornton (8 points each), as the Cs went from down seven to up nine in the span of six minutes. Led by the second unit, the Celts led the defending champs 49-45 heading into halftime.

But then -- the second half began. And stop me if you've heard this one before..the Celtics suddenly stopped playing so well. The Spurs started attacking offensively, scoring 23 of their 33 third quarter points either in the paint or at the free throw line. Despite the ugliness, the Celts were only down five heading into the fourth quarter. A reasonable deficit for most teams -- but not for the worst fourth quarter team in the NBA.

As we've seen many times over the past two seasons, the Celtics were torched in the final 12 minutes. The Spurs outscored them 21-7 over the first eight minutes of the 4th, going up by 19 points as the Celtics shot 1-10 to start the quarter. By the time the onslaught was over, both teams had emptied their bench, and whatever the opposite of Gino time is was going on as the Spurs laughed on their bench.

Yes, the talent gap is wide. But there is something else going on with the Celtics absolutely abysmal play at the end of games. It's part roster construction (no go-to guy), part coaching, and partly on a group of players that have yet to really show any growth in crunch time. It's ugly, and it's the main reason the Celtics are 4-10 as November ends.

Next game: Tuesday in Atlanta.