Video: Highlights of Marcus Smart's 16 pts in 16 min; did you know he's leading the NBA in 3PT FGA? 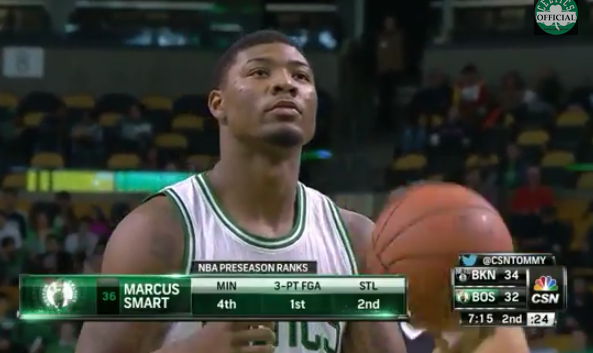 Smart only played in the first half (as was the case for most of the starters) during Wednesday's 100-86 preseason finale victory over the Nets.  In 16 minutes of action he went 5-8 from the floor, 2-5 from downtown and 4-4 at the free throw line for 16 points, 1 rebound, 4 assists and 2 steals.  Smart posted a team-leading +/- of 19 as well.

And if you look closely at the above screenshot from CSNNE, Smart has taken more three-pointers (44) than any other NBA player this exhibition season.  It's somewhat misleading as only Boston and Washington have played 8 games, but still...

Considering Smart hit just 25% of his long-rang attempts, let's hope it's a trend that doesn't continue.