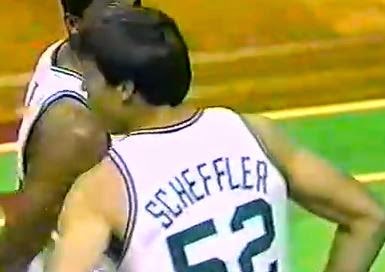 When people pose the question "who is the worst NBA player of all time?" this guy immediately comes to my mind.  But did you know Steve Scheffler almost played for the Celtics?  And that the above photo is from a preseason game in the Fall of 1991?

That's right he was on them during that training camp in what would be Larry Bird's last season.  He even appeared in a newspaper article! 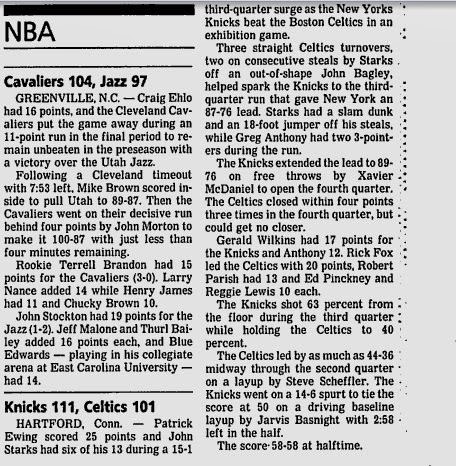 What a hilarious recap.  An out-of-shape John Bagley?  Would that be the same John Bagley who played out of his mind to close the 92 campaign?  Excuse me for forgetting all about Jarvis Basnight!

Fans of recent years remember Brian Scalabrine as the human victory cigar, inserted into many blowout games for mop-up time.  If you happened to watch the 96 Sonics, you'd know that their version of Scalabrine, Steve Scheffler, wasn't as good as Scal.

I still think Steve Scheffler is the worst basketball player I've ever seen, though I may be biased.  Dave Popson wasn't that great.  Neither was Steve Hamer.

But those kneepads and wristbands, they screamed "awkward."  Don't believe me?  Check out Steve's cameo in the 96 Finals vs the Bulls:

One of the comments there from flatulatingmarmoset says "I remember seeing him enter the game back then and he did the raise the roof gesture. It was kind of funny."

Anyone with footage of this event who can supply it to Celticslife will win a free prize.

I give a ton of credit to Steve for lasting as long as he did in the NBA.  Much like Scalabrine, Steve was really one of those "intangible" guys.  A nice guy, great teammate, who worked very hard.  How else can you explain lasting 7 years in the NBA with his skillset?  I'm guessing the record he set in college for highest FG% in a season was a testament of him only taking dunks and layups.

All I know is that Steve Scheffler almost played for the Celtics.  And now, you know that too.