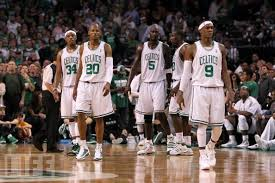 Guest post by The Sports Hayes
The 2000's
This decade was a weird one for it began and ended with two totally different teams but were successful with both of them. The trigger happy Jim O'Brien coached Celtics of Antoine Walker, Paul Pierce and company blasted their way to the Eastern Finals in 2002 and the second round in 2003. The Playoffs in 2004 and 2005 ended badly for the Celtics but by 2008 a new team would emerge to dominate the rest of the decade. So let's get started.
Coach - Doc Rivers 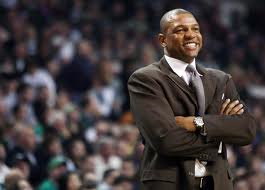 The choices were Evil Emperor, Jim O'Brien, John Carroll or Doc. Doc wins because he brought home the championship and were injuries away from a possible two or 3 peat. O'Brien's teams were good but not as good as "the new big 3". While not much of an x's and o's guy, he's much like KC Jones in the sense he can get the most out of veteran players. Just keep him the hell away from rookies.
Center - Kendrick Perkins
The man known as "Foul, howl and scowl" struck fear into the hearts of opposing players while in Boston. Robert Parish was a nice guy off the court but always had that "I'm about to choke a bitch" look on his face on it. Perkins on the other hand had a permanent "I'm gonna choke, dissect and eat this bitch alive for lunch" face that is sorely missed these days. While not the most talented player, he was the perfect defensive compliment to KG's perimeter roaming and ever since he was traded, the Celtics have never made it back to the Finals. It was like trading Paul Silas all over again.
Forward - Kevin Garnett
No brainer here. The future hall of fame forward made his name with the Minnesota Timberwolves before coming over in a ginormous trade in 2007. He then spent the next 6 years with the Celtics and reached the NBA Finals twice (winning once), the conference finals in 2012 and near misses in 2011 and 2013. His injury in 2009 quite possibly cost the Celtics the championship that year too. KG was known for perimeter defense and his outside shot, deadly weapons on a championship team.
Forward - Paul Pierce
Another no brainer. "The Truth" was the heart and soul of this franchise for parts of 3 decades from 1999-2013. I could go on and on about numbers but the truth, if you will, was he was a true hall of fame player in every sense of the word. He was apart of two entirely different playoff teams in the beginning of the decade and in the end. He reached the NBA Finals twice (one win), the conference finals twice more and the second round three times. While classic Celtic fans would be appalled of "second round appearances" keep in mind Pierce had to do it in 2003 with absolutely no bench help, in 2009 without Kevin Garnett and Leon Powe and 2011 with Perkins traded and Shaq hurt. The bottom line was he could slash, hit the 3 point shot and hit free throws which is a must when you drive to the basket. There's no arguing Pierce's legacy. 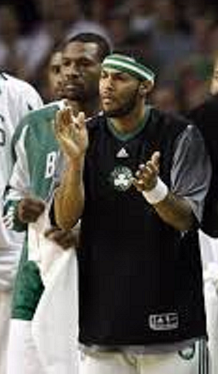 Guard - Ray Allen
As if you couldn't guess, we're going all 2008 Celtics here, and why not? Ray Allen has been one of the top mercenaries in NBA history. He always drops by for a few years before moving on, usually with success. He's one of the sweetest shooters of all time and a clutch shooter as well. He led Milwaukee to the Eastern Finals in 2001 and had a 5 year run with the Celtics that included the 2008 NBA championship. He left the Celtics in 2013 to win a ring with the Miami Heat and fell 3 wins short of another in 2014. While some Celtic fans hate him for bolting for the Heat, look at the bright side, at least he didn't go to LA.
Guard - Rajon Rondo
The 5th and final member has been one of the top point guards the past 6 seasons. His play in 2007 and 2008 left a lot to be desired but he came out into the spotlight in 2009 in THE greatest first round series of all time. If you have a chance to watch the 2009 Celtics/Bulls series aka Rose vs Rondo, please do so. Rondo can't shoot to save his life but his uncanny quickness makes him a threat for rebounds and uncontested layups. He's also an elite playmaker and is one of the few guards in memory (Jason Kidd as well) who can pull triple doubles. There's no way the Celtics would have lost to the Knicks in 2013 if Rondo wasn't hurt.
2nd Team
Center - Tony Battie

This was a tough one as you hard Mark Blount, Chris Mihm, Raef Lafrentz, Michael Olowokandi, Vitaly Potapenko and Patrick O'Bryant to choose from. Ok maybe that wasn't such a hard choice. Battie embodies the 2002 Celtics that didn't have the top names in the league on paper, but always made the right play to help win games. Battie could hit the clutch basket, grab the important rebound and make the key block on defense. Battie also had longevity,  remaining in the league nearly 10 years after being traded from the Celtics.
Forward - Al Jefferson
Big Al has had a great career after leaving Boston, he's the one guy that was included in the Kevin Garnett trade (well...Ryan Gomes MAYBE) that the Celtics miss. He had a great jump hook, could grab the rebound and wasn't afraid to pass the ball either. Big Al was a great low post player that hasn't had the playoff success he deserves because he played for the god awful Minnesota Timberwolves and Utah Jazz the past 7 years. He would have been great on the Celtics last year after KG was traded.
Forward - Tony Allen
Every team needs a defensive stopper if they hope to win a championship and Tony Allen was the one during the "new big 3 era". His defense in 2008 and 2010 were superb when the teams made their Finals runs. After leaving the Celtics in 2011, Allen won NBA defensive player of the year for the Grizzlies. If there was ever a guy the team missed, its Allen. He won't light up the stat sheet but Celtics fans don't give a damn about stats as long as the team wins. Allen certainly helped the team win from 2005-10
Guard - Eddie House
Beating out JR Bremer, Tony Delk, JR Giddens, Wally Szczerbiak, Jiri Welsch and Dan Dickau wasn't easy but Eddie did it. He was a major part of the 2008 Celtics, especially in the playoffs where Rondo crapped his pants (go back and watch Game 4 against the Lakers, it was House who hit the clutch baskets). He also was a perfect compliment in the knock-down shooting department to Ray Allen. After leaving Boston, he just missed winning a ring in 2011 with the Miami Heat.
Guard - Kenny Anderson 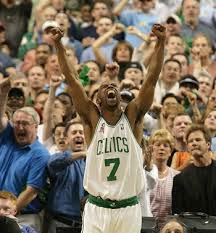 The 2002 Celtics guard had a great career that was highlighted by the Celtics run to the 2002 Eastern Finals. He was a deadly free throw shooter, a lefty outside shooter and an accurate passer who bridged the gap from Evil Emperor to Jim O'Brien. His steal of Jon Barry helped wipe out the Pistons in 2002 and he hit several key baskets against the Nets. He may have only played 3 years in the decade but he was sure a hell of a lot better than most everyone who came after him.
Extra - Glen Davis
"Big Baby" was one of the most bizarre players in team history. Sometimes he looked like a hall of famer that could start at both forward and center while hitting clutch shots against the Orlando Magic in the 09 playoffs...and other times he looked like he had nothing between the ears like when he shot a 3 pointer that even had Doc Rivers up in arms. "A three...A THREE???". Still, there's no denying his talent that continued to put up good numbers for the Orlando Magic after he left Boston (which is how he beats out Leon Powe, longevity) and if he just was a bit smarter, could have been an all-star.
12th man - Walter McCarty 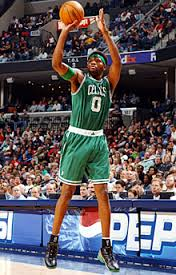 "I LOVEEEEEE WALTAHHHHHH!!!" bellowed Tommy Heinsohn and the Celtics fans whenever Walter hit the 3 point shot. McCarty was an outstanding college player for Kentucky that couldn't quite bring the same talent to the pro's but he had his moments. He played a big role in defeating the Sixers in 2002 and the Pacers in 2003. He was the unofficial team mascot before Brian Scalabrine took over his role in 2006. I give the nod to Walter because he was a better college player and actually put up some good games in the playoffs.
That about wraps up the 2000's. You had 2 great but entirely different teams with similar success. The next decade will be the last, the 2010's.
Be sure to follow the Sports Hayes on Twitter.