Despite probably the greatest shot I have ever seen from Kevin Durant considering the circumstances, Memphis perseveres and beats OKC in overtime 111-105.

Former Celtics Tony Allen and Courtney Lee were key contributors in the Grizzlies win. Lee hit two crucial free throws in the overtime frame to ice the game for the Grizz.

Lee finished with an immensely efficient 16 on 6-9 shooting and the Grizzlies were plus 6 with him on the floor.

Allen, on the other hand, made his contributions more on the defensive end covering Kevin Durant like glue the entire game. Durant finished at 12-28 from the floor and 36 points but had to work for every one especially when matched with Allen. 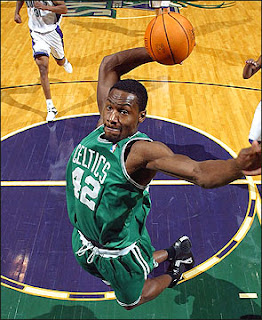 Allen contributed in other ways as well with eight points and six rebounds in 35 minutes.

Kendrick Perkins put his stamp on the game as well by scoring the put back, after a Westbrook miss, to send the game to overtime.