Will the Luol Deng to Cleveland trade alter the Celtics draft position? 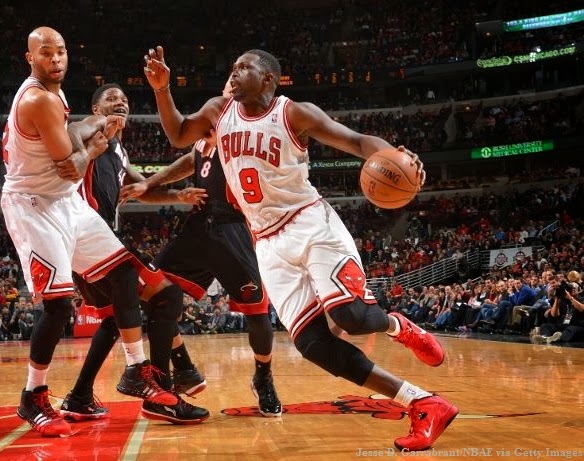 Last night the Bulls dealt All-Star forward Luol Deng to the Cavs for Andrew Bynum (who's going to be cut before 5 pm today) and some draft picks.  Basically the question is, who's tanking now?

Losers of 4 in a row and 7 of 8, the Celtics potential draft position has been skyrocketing of late (with a brutal schedule on the way for the next 11 games as well).  Just last night Brooklyn moved into a tie with Boston at 13-21, and both teams now sit only two games ahead of Cleveland (11-23) for the 5th worst record in the NBA.  Heading into the season, the Cavaliers had no intentions of playing for the lottery.  Many picked them to be in the middle of the pack in the East playoff race.  Now that they've gotten rid of a cancer in Bynum and added a very good player in Deng, what's to stop them from rapidly climbing in the standings?  Clearly this is a move on their part with aspirations of making the postseason this year, rather than aiming for a top pick.

But there is still a chance the trade may not actually improve Boston's lottery standing in any way.  At 14-18 Chicago is just two games ahead of the Celtics.  They've rallied around playing without Derrick Rose before, but now that ownership has dumped their leading scorer to save money it's going to be hard for them to find the motivation to keep playing their signature brand of great defense for Tom Thibodeau.  From the Bulls standpoint this deal seems very likely to send them plummeting towards the bottom of the conference.

All in all it feels like a wash for the Celtics.  Chicago is just as likely to fall below Boston as Cleveland is to pass them.  But in the crazy bad Eastern Conference this year there's no way to predict these things; I assumed the Rudy Gay trade was an indication of Toronto's plans to tank, but instead they're looking like the #3 seed in the playoffs.