Report: Celtics would like to extend Rondo, possibly trade Jeff Green along with Gerald Wallace 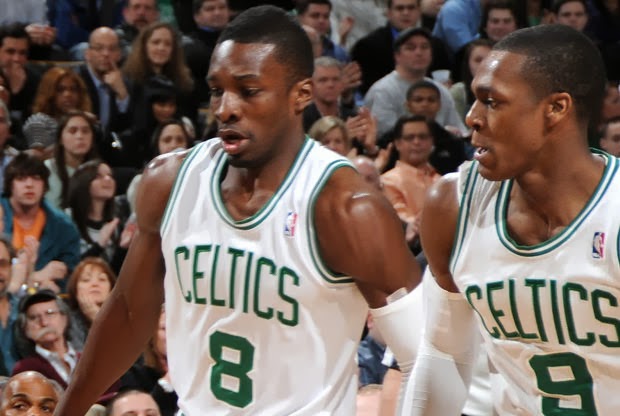 Per usual when we post a report, there is this caveat:

Take everything with a grain of salt.

Nothing is final until it actually happens. Or at least until Woj reports it.

With that said, Sam Smith, who writes about the Bulls for NBA.com had a ton of tidbits in his "NBA News and Notes" article from today. Among them, that Jabari Parker may stay in school for his Sophomore year, which Julian wrote on earlier.

Also among them, this bit about the Celtics future plans, specifically there plans with Jeff Green and Rajon Rondo.

It sounds more and more like with Rajon Rondo’s return and a ceremonial bestowing of captaincy the Celtics plan to keep Rondo and try to get him to extend. It makes sense given the importance of point guards. More executives think the Celtics want to trade Jeff Green. They’re probably trying to persuade someone to take Gerald Wallace along with Green, though many figure they’ll eventually move Green. A nice exchange could be for Omer Asik, giving the Celtics a point guard/defensive center core to move forward with along with Jared Sullinger and Kelly Olynyk. And Houston could use Green as a stretch four scorer


So Smith has heard the Celtics want to trade Green, which makes a lot of sense. After all, Green does not look like the starting small forward on a good team. He's immensely talented but floats too often, and looks more and more like a role player than a go-to guy. With the team in the midst of a total rebuild, the Cs likely have their eye on several small forwards in the draft, and if they don't view Green as the long term answer why not see if they can get out from the 2.5 years and $23 million remaining on his deal? It's a smart move to see what his value is.

But the whole "trying to persuade someone to take Gerald Wallace along with Green" aspect of this report? Yea, not going to happen.

Dealing Green by himself will be tough, but it's doable. He's talented and while not an alpha dog, he can score the basketball in a variety of ways and defend several positions at an above average clip.

But tacking on the albatross that is Wallace? Good luck, Danny. All of a sudden you go from taking on $9 million worth of Jeff Green, to taking on $19 million of Green/Wallace. Considering Wallace's value on the court (zero), taking on his $10 million salary through 2016 is a complete no-go for any team..unless they're getting back Rondo or a very nice first round pick. So while I have no doubt Danny would ask for that to start (hey, why not?), it's just not realistic.

Speaking of Rondo, Smith also touches on the Celtics recently rehabilitated point guard, saying it 'sounds more and more like the Celtics will try and get him to extend', using the Celts naming him captain as proof.

I think that extending Rondo is very possible, but I don't think him being named captain impacts the negotiations. I already thought it was very unlikely they deal him before the February 20th deadline, for several reasons.

1. He's just now back on the court, giving him only a month to prove he's back to 100%. With Rondo under a minutes restriction and looking rusty, it's going to take awhile before he's back to his previous level. It will happen, but probably not consistently until late this season or even next year.

2. There just aren't enough (read: barely any) contenders who both: need a point guard AND who have the requisite pieces to get a deal done. To deal for Rondo you need expiring contracts, young players and first round picks. Or at least two of the three. There aren't a ton of teams that have those pieces and a hole at PG.

With Rondo being named captain, I think #9 being a Celtic past the 2/20 deadline is set in stone even more. Would the team name him captain and trade him three weeks later? Seems a tad bit embarrassing. Why put the C on his chest unless he's going to actually serve that role for the rest of the year? But once the season ends, I think Boston would definitely listen to offers. The team is still knee deep in a rebuild, and once Rondo re-establishes his value, it would be silly not to investigate every single avenue to make the team better. Now, because of the market (not great) and Rondo's ridiculous playoff career (really great), I've always maintained that building around him is the way to go. But I don't think him being named captain necessarily means Boston is committed to him for the next six years (his remaining year plus a max deal). Then again, I don't have Smith's sources.

Down to exactly a month till the deadline, so prepare yourselves for all kinds of rumors. Legit ones, borderline legit ones, and downright absurd ones. It's that time of year. As for this report, I'd put it in the middle category. Some good info, but nothing to hang your hat on.