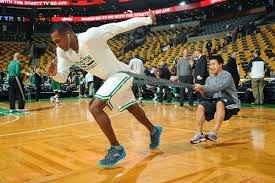 I wrote on Monday about the Celtics considering sending Rajon Rondo to Maine to play in the D-League as part of his rehab for his torn ACL. Now today the news has broken that this was actually Rondo's idea according to Danny Ainge:

“He’s anxious to practice and to play. It was his idea to go practice with the Red Claws and possibly play with them at some point," president of basketball operations Danny Ainge told 98.5 The Sports Hub Thursday morning. "But those are still in discussion. I’m not sure when he would do that, but that’s probably the next step.”


It's nice to see Rondo so willing to get back into action that he would take a step down to the NBADL. But the real story here is that this probably means Rondo is going to play at some point this season.

I have had the mindset this year that I will believe it when I see it in terms of Rondo returning to the floor. Not that he doesn't strike me as the type of player that is working hard to come back. But because the Celtics and Rondo himself have just kept pushing his return date back… interesting in a year that "tanking" has been such a hot topic.

On the other hand, an ACL tear (even though Rondo's is a partial tear) is a very serious injury to return from. Something that takes lots of time and intense rehab. With this news now coming out, it appears very likely that Rondo will indeed play this season.

Now the question simply becomes: when?