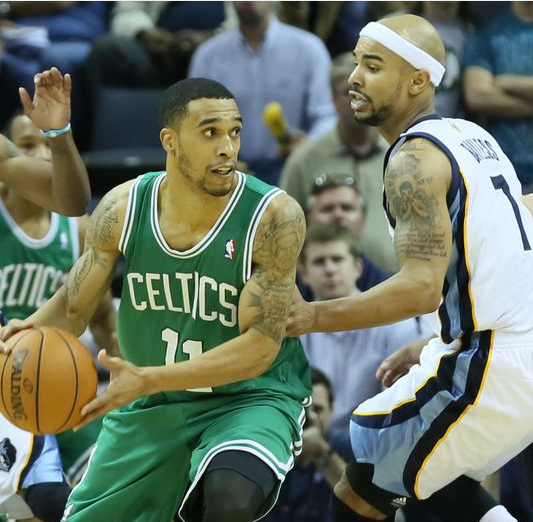 Heading into this past Sunday’s road game against Detroit, Jerryd Bayless knew it would most likely be the last time he suited up for the Memphis Grizzlies. Even with his immediate future unknown, Bayless did exactly what the Grizzlies needed him to do- scored 10 points and dished out 5 assists in 26 minutes off the bench helping Memphis to a 28 point victory.

Bayless, who is averaging 8.1 points this season, is active for the Celtics tonight in their road game against the Nuggets.

Jerryd Bayless is no stranger to the Boston Celtics. ESPN reported earlier this week that he has been pursued in the past by Danny Ainge.

"We've always liked Jerryd," said Celtics president of basketball operations Danny Ainge, who has watched Bayless play since he was in high school in Arizona.

ON HIS WINS AGAINST THE CELTICS

"Yeah, I remember them," he said. "It went well. Hopefully that can kind of correlate and translate to me being in Boston now."

While there are several moving parts to this deal- specifics of which have been included at the bottom of this post- essentially it boils down to this:

The Celtics were able to get a player they’ve had their eyes on while at the same time shedding cap space and trading an expiring deal for one with $11M left.

It doesn’t hurt that Bayless has the ability to score points in bunches and is averaging 18.5 against the team he now calls his own.

He’s also saying all the right things. Below are some excerpts from his first interview as a member of the Boston Celtics:

ON PLAYING FOR BOSTON:

ON ADAPTING TO THE SITUATION:

"Whatever I can help this team with is what I’m going to try to do," said Bayless, "and obviously when [Rajon] Rondo gets back, it’s going to be more [shooting guard]. He’s the best point guard in the league."

ON PLAYING FOR FIVE TEAMS IN SIX SEASONS:

"I don’t think it’s a negative thing, because at the end of the day, every time you bounce around, somebody else wants you. That’s the way I try to look at it. Here, hopefully this can be one of my last stops."

DETAILS ON THE TRADE: