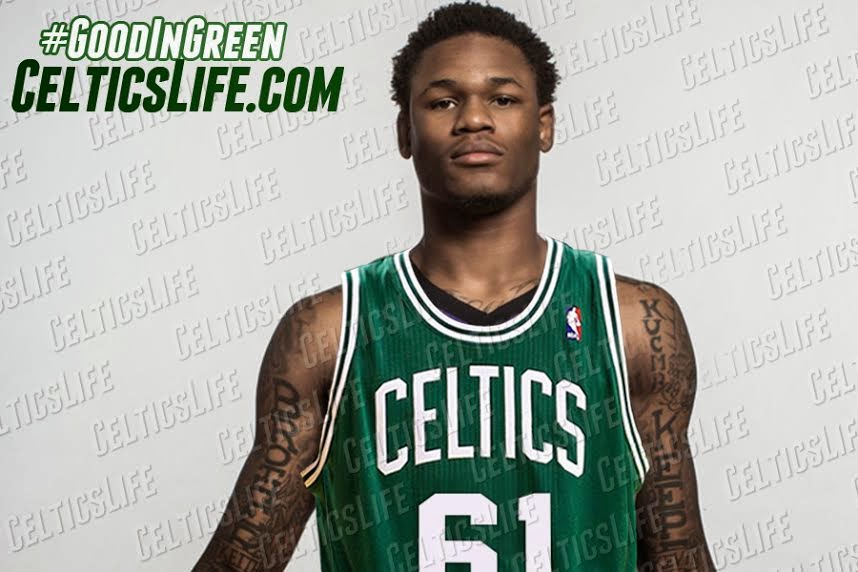 Yesterday, the International Business Times' Lou Ramon Aguila published an article in which he said that the Celtics and Kings had discussed a potential deal for Rajon Rondo. A deal that would send four players and two picks to Boston for their currently rehabbing point guard. From the story:

After trading for Derrick Williams and the Rudy Gay this season, the Kings continue to be aggressive on the trading front, but this time they are looking to acquire the reigning assists champion.

The Celtics front office stressed that they have no intention trading away Rondo, who is still rehabilitating from an ACL injury. However, the Kings are willing to trade away their young stars and draft picks for a shot at landing the prolific floor general.

Spearheaded by a new ownership, the Kings envision a formidable starting lineup consists of Rondo, Gay, Williams and center Demarcus Cousins. Sacramento has not appeared in the postseason since the 2005-2006 season, the last year of Rick Adelman as a coach. However, the efforts being put into by the current ownership only showed the Kings' intention to contend for a playoff spot after several years of futility.

So, to summize, the Celtics would trade Rondo, and receive: Isaiah Thomas, Ben McLemore, Marcus Thornton, and Jason Thompson from SacTown.

Now, I do not know Aguila, nor his sources. It's quite possible that he's a really good reporter with legit sources in the NBA. But in this case, he's either making this up, exaggerating what he heard, or his source is lying to him.

How do I know?

Well, for one, the trade he proposes sends only Rondo ($12M salary) out of town, yet Boston receives $17.5 million in salary in return. Per NBA rules, since the Celtics are over the salary cap, they cannot receive more than 125% of their outgoing salary in any trade (meaning they can't take in more than $15 million in this particular trade). Of course, the Celtics could throw in the expiring $5 million that Keith Bogans is owed to make this work. And if that was the only problem with this deal, I might have said to you "Hey, he simply forgot about Keith. No big deal..I forget about Keith all the time". But it's not the only thing wrong with this deal.

Aguila also has two first round picks heading from the Kings to the Celtics. Which is a problem considering Sacramento owes the Cavs a protected 2014 1st rounder. The pick is protected top 12 in 2014, and top 10 in 2015, 2016 and 2017 (if the Kings never pick outside the top ten, they give their 2017 2nd rounder to Cleveland instead). That means that the Kings cannot trade another first round pick until they trade a first to Cleveland. Considering you cannot trade first round picks in consecutive seasons, Sacramento is forbidden to trade picks until at least 2019. And thanks to the "Seven Year Rule", the furthest into the future a team can trade it's draft picks is 2020 (even though this season ends in 2014, the seven year rule is based on the year in which that season began). Since Sacramento cannot trade their pick until 2019, and can't trade their pick in consecutive seasons - it's impossible for them to trade two first round picks at this moment.

It also does not help this rumors' case that Aguila spelled both Marcus (Marcos) Thornton and Isaiah (Isiah) Thomas' names wrong. Not that I'm going to sit here and throw rocks while sitting in a glass house or anything. I know I've made my share of spelling and grammatical errors in posts. With that said, I do not have an editor, and I'd expect anyone attempting to break some serious NBA trade talks to have one (or at least to have the players' names right. Screw up a there/their/they're instead).

The Kings could be a fit for Rondo's services, but the trade would most likely need to include Boston dumping Gerald Wallace's deal to make up for the fact that the Celtics could only receive one first round pick (and it wouldn't be until 2019). Something like Thomas, McLemore, Thornton, Jimmer Fredette, Travis Outlaw and the Kings 2019 1st rounder for Rondo and Wallace would save Boston a bunch of money in both 2014-15 and 2015-16, and give them three fairly valuable pieces (Thomas, McLemore and a future 1st). Not that I'd do that trade if I'm Boston, but I'd at least listen for a moment before hanging up.

As for the proposed trade in this article though - it's just not possible. The NBA has a lot of weird rules, and this one breaks more than one.