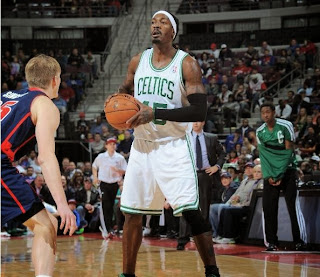 According to ESPNBoston.com's Chris Forsberg Gerald Wallace believes unselfish play and trust are two of the cornerstones of the recent Boston Celtic resurgence:

The Celtics lost four straight and now have won four straight. So, is the glass half empty of half full? Count Wallace among the optimists. "We're a lot better than the first games we played, but the first games were expected from guys first time playing together, new coach, new system," said Wallace. "I think the effort was there, [but] there was a lot more selfishness, guys not trusting each other, not understanding each other, not knowing how to play with each other in the first couple of games. But the effort was there. We just continued to play and get that trust, and it's starting to show now."

Wallace is definitely practicing what he is preaching. In 29 minutes per he has only averaged four shots per game. He also has been an excellent distributor, not unlike Jordan Crawford, with 5 in Monday's win against Orlando and 7 against The Heat on Saturday including the on target overhead pass to Jeff Green for the unforgettable game winner. This pass is even more impressive considering he could not see Green on the floor when he let it go:

“I never looked at Jeff," Wallace said Monday at the TD Garden before meeting the Orlando Magic. "Me and him talked coming out of the timeout and I asked him where he was going to be at, where was he expecting to go? Was he going to stop short or was he going to keep going? And he told me that he was going all the way to the deep corner: ‘just get the ball to the deep corner.’

"So my main focus was I never paid attention to him; I paid more attention to (Heat center Chris) Bosh, making sure those guys didn’t switch and nobody was able to jump out in front of the passing lane or whatever. I threw it exactly to the spot he asked me to throw it to.”

When looking back at The Celtics first four games it's difficult to pinpoint who Wallace was talking about with regard to being selfish by looking at the box scores. Having said that, there are countless ways for a player to be selfish without taking an overabundance of shots including: not setting good screens, not fighting through screens and talking on defense and not boxing out.

The opposing team's offensive rebounding numbers had been especially problematic.

In the first two games of the season Boston allowed 36 total offensive rebounds in losses against The Raptors on the road and in the home opener at TD Garden against Milwaukee.

The next game against Detroit they somewhat improved allowing 15 in a tough loss in The Motor City.

The real breakthrough, however, came the following night against The Grizz in Memphis when The Celtics gave up only 9 to a team that was the third leading offensive rebounding team in the league last season on their way to the Western Conference Finals.

This trend continued against woeful Utah as The C's gave up just 11 two nights later in their first victory of the season in Boston.

And, in their signature win of the season over The World Champion Miami Heat on Saturday, The C's, gave up a grand total of four offensive rebounds.

The opposing team's diminishing offensive rebounding numbers are a credit to Brad Stevens' coaching as well as a credit to Wallace whose fiery competitive nature has obviously been one key component of The Celtic turnaround.