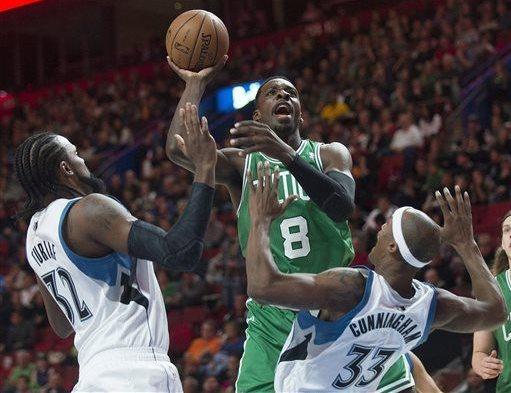 After finally deciding to show some aggression himself, Jeff Green was also upset with the Celtics lack of effort last night. Resisting the temptation to say that the team "needed to play less like Justin Timberlake's '20/20 Experience Part 1' and more like Justin Timberlake's '20/20 Experience Part 2", Green spoke to reporters and had some pretty harsh words:

“I think it’s too late to blame the whole working-out-kinks statement that we’ve been making for these past couple of games,” said Jeff Green, who got to the rim well and even got some time defending point guard Ricky Rubio. “I think at this point we know what to do. We’ve just got to go out there and play.

“They just wanted it more than us, plain and simple. We can’t allow teams to play harder than us. . . . I think today we took some steps back in our progress. We can’t come into this thinking just because it’s preseason we can half-(expletive) it. We’ve got to be ready to play.”

To this point, Jeff Green calling his team's efforts out is like a narcoleptic calling his friends sleepy. Or Lebron questioning a player's loyalty. Asinine, and absolutely nothing short of it.

This team desperately needs everything Jeff Green can bring to the table. 2 Hall of Famers left town, 1 All Star is out for a while. If this team doesn't want to be a complete laughing stock they need Jeff Green to bring it. And up until last night, where he found himself starting the game on the bench, 'Iron Man' has apparently been employing his invisibility shield. More often than not standing motionless behind the three point line, hoping for the ball when he should be demanding it.

What is so maddening about Jeff Green is that he's so unworldly talented, particularly when it comes to his quickness. On good nights, it doesn't matter that his opponent knows he wants to go right, his unique combination of length and quickness can make him almost unstoppable. The difference is the bad nights. As opposed to his disappearing act, this team needs him to stay aggressive, shug off the shots that rim out, and remind himself of the importance of getting to the free throw line. Last night's a great example of that: Green shot 3 from 10 from the field (1 from 5 from downtown), but found himself on the free throw line 7 times in 24 minutes. When he's attacking, good things happen. But he doesn't seem to be able to understand this, or at least, consistently remind himself of this when he gets on the court.

And what that comes down to? Effort. Night in. Night out. Not just when it's convenient for you, Jeff.